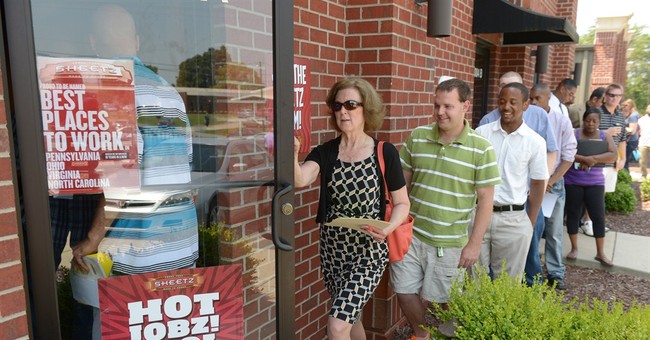 The Bureau of Labor Statistics is out today with its estimate of how many jobs the economy added in July - and it's 209,000. It's down from the huge gains in June but still relatively good news - it's the sixth straight month with jobs gains over 200,000.

The unemployment rate, however, actually ticked up in July, to 6.2%. It's a result of a few different things - the labor force participation rate ticked slightly up by a tenth of a percentage point, for example. The broader, seasonally-adjusted U-6 measure of unemployment also ticked up, by one tenth of a percentage point, to 12.2%. U-6 takes into account discouraged and underemployed workers, which means those people who may have long been looking for a job but left the labor force are counted.

The jobs number narrowly missed expections. ADP, the nationwide payroll firm, estimated that there would be 218,000 jobs this month.

Many indicators were unchanged this month. What's interesting to note is that all of these indicators are much better than where we were a year ago:

In July, 2.2 million persons were marginally attached to the labor force, down by 236,000 from a year earlier. (The data are not seasonally adjusted.) These individuals were not in the labor force, wanted and were available for work, and had looked for a job sometime in the prior 12 months. They were not counted as unemployed because they had not searched for work in the 4 weeks preceding the survey. (See table A-16.)

Among the marginally attached, there were 741,000 discouraged workers in July, down by 247,000 from a year earlier. (The data are not seasonally adjusted.) Discouraged workers are persons not currently looking for work because they believe no jobs are available for them. The remaining 1.4 million persons marginally attached to the labor force in July had not searched for work for reasons such as school attendance or family responsibilities. (See table A-16.)

This report follows heartening news on the economic front: this week, government economists estimated that the economy grew at a 4% rate in the second quarter of 2014, which was a huge improvement after a contraction in the first quarter.