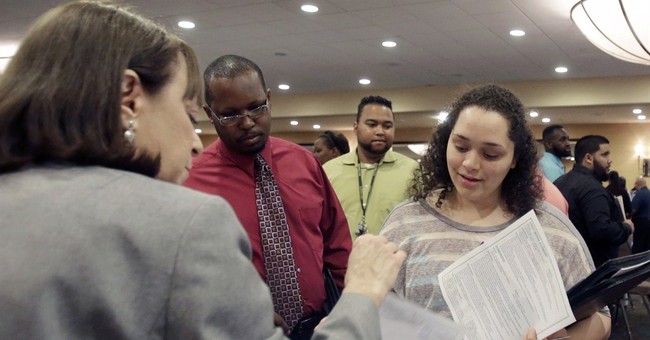 A fascinating new poll out today from the Pew Research Center reports on how they've tracked Americans' beliefs on political issues over time. It's wide-ranging and deep and a fascinating look at what Americans believe. One of the most important parts is how the two coalitions - Republicans and Democrats - have changed over the last twenty years. And it takes a sledgehammer to myths that liberals have been telling themselves.

Asymmetric polarization, as espoused by analysts like the Brookings Institute's Thomas Mann, goes something like this: Democrats have created a big tent governming majority that tolerates lots of different views and, as a result, has a kind of "moderate center" that has remained relatively consistent; while Republicans have exiled the centrists in their party as grassroots voters have taken over and made their party more extreme all on their own.

The typical measurement of asymmetric polarization comes from a Congressional metric called DW-NOMINATE, which at its heart measures how often elected representatives in Congress vote with each other. The flaw here is that it doesn't take into account the relative leftness or rightness of a proposal being voted on. If there were a vote in Congress to repeal the 2nd Amendment, for example, with all Republicans voting against and Democrats split evenly between for and against, would be a data point contributing to Republicans becoming more "extreme" and Democrats being relatively centrist. DW-NOMINATE has certain utility in evaluating legislative coalitions, but as an actual measure of how left-wing or right-wing any coalition is, it's severely lacking.

Pew's survey finds a lot of interesting trends in the Republican Party, but one thing is certain: Democrats have gotten much more liberal over the last twenty years. Pew actually measures how people feel about a lot of different issues, not just how their votes cluster. Democrats moved noticably leftward in the late 90s. What is true is that Democrats stagnated throughout the Bush years in how Pew measures how liberal they are - they remained relatively consistent. But in the Obama era, Democrats have veered sharply leftward, as shown in these two images; watch how far the median Democrat jumps from 2010 to 2014:

The softer asymmetric polarization theory would admit that Democrats have moved further leftward, but Republicans have moved a lot further to the right. That might be true, but only if you cherry-pick what time you start measuring from. Which leads us to...

Pew provided this gif to go along with their survey. What happens to the Republican coalition is absolutely fascinating: contrary to the idea that George W. Bush was some kind of extremist, the Republican coalition moved sharply leftward in the early Bush years, peaking at a point in 2004 where the GOP coalition overlapped considerably with a Democratic one that hadn't changed much:

The median Republican, according to Pew, is only slightly to the right of where they began measuring in 1994. What happened was that the GOP got much more liberal from 1994 to 2004, and came back to the more conservative end of the spectrum after that.

Now, 1994 might also have been a conservative outlier - it's possible that Republicans were a lot more liberal prior to 1994's "Contract With America" and the Republican takeover of the House of Representatives - but what's clear is that the GOP coalition has been a lot more in flux in the last 20 years than the Democratic one - which has simply gotten consistently more liberal.

Liberal writers have long believed in the ideological diversity of the Democratic Party and lamented that an entrenched, monolithic Republican machine was what was keeping Democrats from achieving their goals.

Pew has this to say:

There is as much ideological uniformity on the left as the right. The share of Democrats holding consistently liberal views has grown steadily over the past 20 years, quadrupling from 5% in 1994 to 23% today. Social issues like homosexuality and immigration that once drove deep divides within the Democratic Party are now areas of relative consensus. And Democrats have become more uniformly critical of business and more supportive of government.

Much of this trend simply follows from the previous: Democrats have gotten more extreme, they've become a lot more unified ideologically, and therefore they're quite a monolithic party now. What was certainly not conventional wisdom, however, was the diversity of the Republican party in the Bush years. A significant faction of the Republican party was to the left of the median Democrat, and it wasn't because Democrats had been particularly moderate.

The Republican coalition has shifted in interesting ways in the last twenty years - going from conservative to liberal and back again. The Democratic coalition, on the other hand, has pretty consistently gotten more liberal - and that's a reality that analysts need to grapple with.