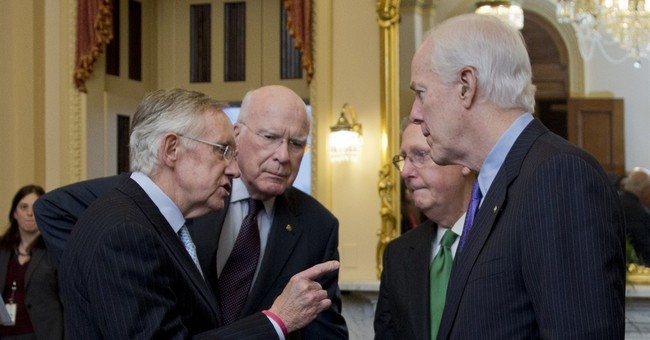 Patent reform and intellectual copyright reform more generally have been gaining steam on Capitol Hill and in the conservative movement recently. Reform advocates thought they had a slam-dunk with a bipartisan bill that would have attempted to curb the practice of "patent trolls" - frivolous lawsuits based on claims of patent infringement - until Sen. Pat Leahy, chairman of the Senate Judiciary Committee, put the brakes on the proposal.

Brian Fung of the Washington Post has the details:

The bipartisan compromise on patents was headed for a markup on Thursday. But Leahy suddenly took it off the table after Senate Majority Leader Harry Reid (D-Nev.) intervened at the last minute, according to multiple people close to the negotiations.

As late as Wednesday morning, Leahy and the bill's two top shepherds — Sens. John Cornyn (R-Tex.) and Chuck Schumer (D-N.Y.) -- were said to have settled on the bill's language, saying, as one reform advocate put it, "pencils down."

Harry Reid's fingerprints are all over this, and it's an example of Mitch McConnell's criticisms of how Reid has put the Senate completely under his thumb.