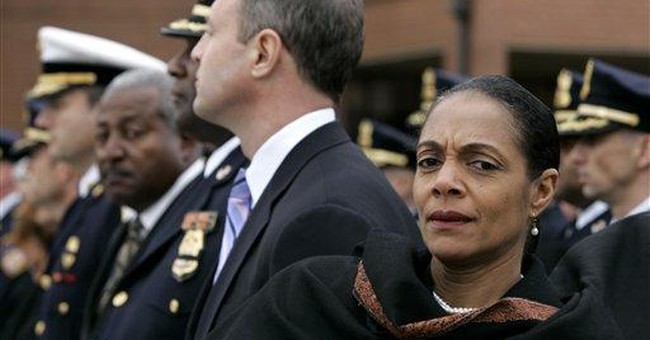 In case you missed it over the weekend, race riots broke out in Baltimore. Here's some background on why:

25-year-old Freddie Gray was arrested for possessing a switch blade knife April 12 in Baltimore. According to his attorney, Gray died a week later in the hospital from a severe spinal cord injury he received while in police custody.

The usual suspects are involved in the aftermath, against the family's wishes, and the race ghouls were tweeting selfies with Gray's body at the funeral.

Disgusting media circus taking photos every 3 seconds of a casket for a 25 year old kid. pic.twitter.com/zvOzXeJMvI

Jesse Jackson cares so much about #FreddieGray he couldn't bother to Tweet this himself. He had someone else do it. pic.twitter.com/jcibyDLAxr

Now, the anti-police sentiment we saw in Ferguson last summer and in December when two NYPD officers were executed in their patrol cars, is raging with Baltimore gangs joining forces to kill police.

"The Baltimore Police Department/Criminal Intelligence Unit has received credible information that members of various gangs including the Black Guerrilla Family, Bloods, and Crips have entered into a partnership to "take-out" law enforcement officers," a press release states. "This is a credible threat. Law enforcement agencies should take appropriate precautions to ensure the safety of their officers."

It should be noted the man who shot and killed NYPD officers Wenjin Lie and Rafael Ramos, was part of the Black Guerrilla family gang and traveled from Baltimore to New York City in December to carry out the crimes.