BREAKING: Cuba To Be Taken Off State Sponsor of Terror List By President Obama 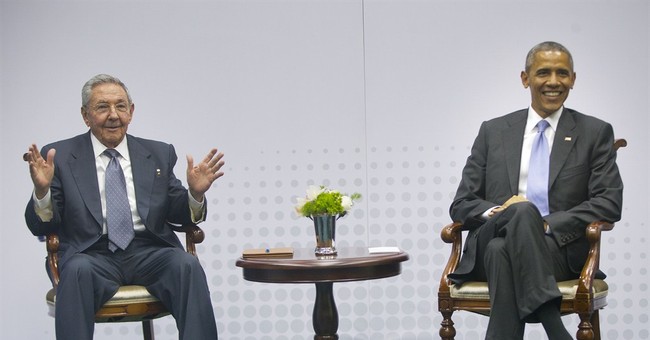 Just four short months after "normalizing" relations with Cuba and just days after meeting with Dictator Raul Castro in Panama, President Barack Obama will reportedly strip the country of its terrorism sponsor status.

It was just last year when the Center for Security Policy publishing the detailed connection Cuba has to Venezuela and Iran in its support for terrorism around the globe. It should be noted that Iran is the world's most prolific state-sponsor of terrorism through Hezbollah, the world's largest terror organization responsible for more American murders than any other group before 9/11/2001.

Iran, Cuba and Venezuela have developed a close and cooperative relationship against the U.S. and in support of terrorist groups and states. The three regimes increasingly coordinate their policies and resources in a three way partnership aimed at counteracting and circumventing U.S. policies in the Middle East and Latin America. Within this relationship, Cuba plays a strategic role in terms of geography (proximity to the U.S.), intelligence gathering (both electronic eavesdropping and human espionage) and logistics.

Further, Cuba is still harboring terrorists and violent fugitives convicted of murder in the United States. More from Henry Gomez:

But is Cuba still a state sponsor of terrorism? Have the Castro brothers changed their minds about the role of violence in bringing about the Latin America they’d like to see?

During the 2000s, the State Department has continually renewed Cuba’s status as a terrorist state on the basis of some unchallenged facts. The Castro brothers continue to harbor international terrorists from Spain’s Basque separatist group ETA and Colombia’s Marxist rebels FARC, as well as American domestic terrorists from groups like the Black Liberation Army.

Nothing has really changed on this front. It’s estimated that 70 U.S. fugitives are being harbored by Cuba, including Joanne Chesimard (AKA “Assata Shakur”), a convicted cop killer.

Apologists for the Castro regime try to argue that Cuba does not meet the criteria of state sponsor of terrorism via technicalities. They insist that the Basque terrorists in Cuba are a matter for Spain to resolve bilaterally with Cuba, and that the FARC terrorists don’t count because Cuba is hosting peace talks between FARC and the Colombian government, and that Chesimard doesn’t qualify as a terrorist because she didn’t kill a civilian, conflating a police officer with a member of uniformed armed forces in a declared war.

Needless to say, the straws they grasp at paint no more of a flattering picture of the totalitarian dictatorship they defend, which is in its sixth decade.

Even if Cuba is removed from the list of state sponsors of terrorism on a technicality, even if Cuba’s tactics these days are less obvious, the uncomfortable fact is that neither the Castro regime’s ideology nor its goals nor its leaders have changed since they day the Reagan administration put them on the list.

Convicted cop killer Joanne Chesimard has been hiding in plain sight in Cuba for years. In light of the new "normalization," when asked recently if she would be extradited back to the United States to finish her prison sentence Cuban officials said they have the "right" to protect "persecuted" fugitives.

Cuba said Monday that it has a right to grant asylum to U.S. fugitives, the clearest sign yet that the communist government has no intention of extraditing America's most-wanted woman despite the warming of bilateral ties.

Chesimard was granted asylum by Fidel Castro after she escaped from the prison where she was serving a sentence for killing a New Jersey state trooper in 1973 during a gunbattle after being stopped on the New Jersey Turnpike.

Asked if returning fugitives was open to negotiation, Cuba's head of North American affairs, Josefina Vidal, told The Associated Press that "every nation has sovereign and legitimate rights to grant political asylum to people it considers to have been persecuted. ... That's a legitimate right."

"We've explained to the U.S. government in the past that there are some people living in Cuba to whom Cuba has legitimately granted political asylum," Vidal said.

In the end, Obama's relationship with Cuba has little to do with diplomacy, but instead has everything to do with the iconic Marxist dream and obsession his far left supporters have held for decades. It's finally coming true.