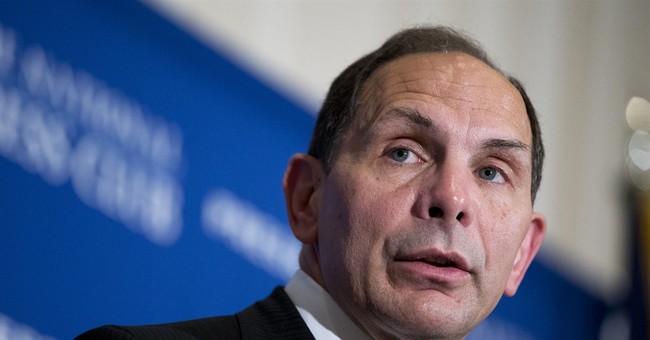 The head of the Department of Veterans Affairs Robert McDonald is under fire today after admitting to the Huffington Post that he lied about serving in the Special Forces.

Robert McDonald, the secretary of veterans affairs, wrongly claimed in a videotaped comment earlier this year that he served in special operations forces, the most elite units in the armed forces, when his military service of five years was spent almost entirely with the 82nd Airborne Division during the late 1970s.

U.S. special operations forces (SOF) are composed of exhaustively trained and highly capable troops from each military service, including the Green Berets, Army Rangers, Delta Force and Navy SEALs -- but not the 82nd Airborne. They are certified to undertake the most dangerous and delicate missions, including, famously, the killing of Osama bin Laden in May 2011. Special operators are a close-knit community deeply hostile to outsiders who try to claim the coveted mantle of special operations.

“Special forces? What years? I was in special forces!” McDonald told the homeless man. That exchange was broadcast in a Jan. 30 CBS News story about the VA’s efforts to find and house homeless veterans.

In fact, McDonald never served in special forces. He graduated from the U.S. Military Academy at West Point in 1975, completed Army Ranger training and took courses in jungle, arctic and desert warfare. He qualified as a senior parachutist and airborne jumpmaster, and was assigned to the 82nd Airborne Division until he retired from military service in 1980. While he earned a Ranger tab designating him as a graduate of Ranger School, he never served in a Ranger battalion or any other special operations unit.

“I have no excuse,” McDonald told The Huffington Post, when contacted to explain his claim. “I was not in special forces.”

In June 2014 McDonald was appointed by President Obama to clean up the VA system after it was revealed dozens of veterans had died as result of long, covered up wait times.

Since assuming his position at the VA, McDonald has claimed 900 people have been fired and held accountable for the VA scandal. That also isn't true.