Obama to Meet With Cuban Dictator Raul Castro in Panama 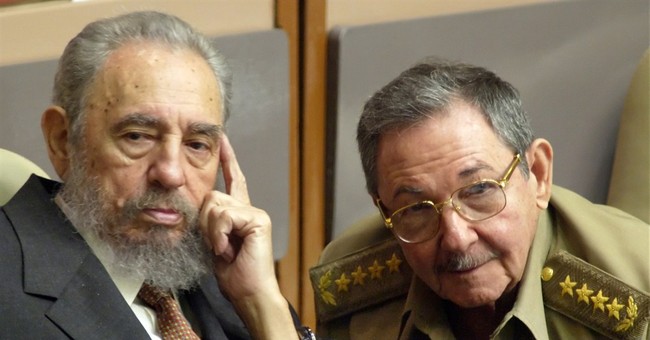 It's been just one short month since the announcement of "normalization" between the United States and Cuba. Although a trip directly to Cuba isn't first on the list, President Obama will reportedly meet directly with Dictator Raul Castro during an April trip to Panama.

President of Cuba Raul Castro Ruz will meet President of US Barak Obama on April 11 in Panama.

This announcement comes shortly after the State Department confirmed 53 Cuba dissidents were finally released by the communist regime after weeks of being unable to confirm where they were located. As Fox News Latino reports, the status of those dissidents is still very unclear and serious questions remain about whether the Castro brothers have really changed.

The release of 53 political prisoners continues to be shrouded in secrecy even after the Obama administration confirmed they had all been set free.

Neither the U.S. or Cuban governments have released names of the political prisoners nor have they disclosed their whereabouts after their release. The Cuban government said it released the prisoners as part of last month's historic deal between the United States and Cuba.

"We welcome this very positive development and are pleased that the Cuban Government followed through on this commitment. Our Interests Section in Havana was able to verify these releases,” said a senior Obama official. “These political prisoners were individuals who had been cited by various human rights organizations as being imprisoned by the Cuban government for exercising internationally protected freedoms or for their promotion of political and social reforms in Cuba.

Most of the released dissidents belong to the Patriotic Union of Cuba, an anti-government group based in far eastern Cuba. The group’s spokesman told Fox News Latino that even though the political prisoners were sprung, the move is purely “cosmetic.”

Republicans like Senator Marco Rubio have vowed to stop Obama's normalization until further concessions from the Cuban regime are made. President Obama has been criticized on both sides of the aisle for normalizing relations with Cuba without preconditions.