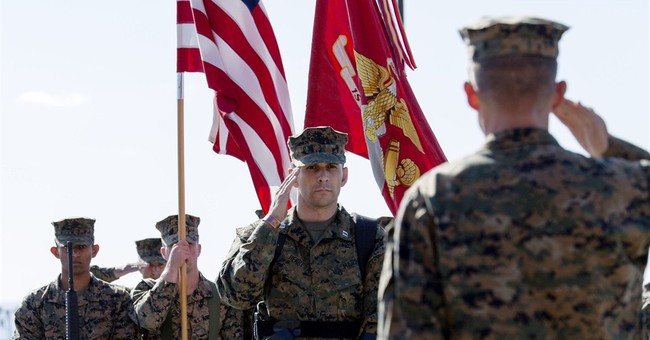 According to a new survey from the Military Times, the morale of the United States military has taken a major hit over the past six years as troops feel lost, without a mission and "adrift."

A Military Times survey of 2,300 active-duty troops found morale indicators on the decline in nearly every aspect of military life. Troops report significantly lower overall job satisfaction, diminished respect for their superiors, and a declining interest in re-enlistment now compared to just five years ago.

Today's service members say they feel underpaid, under-equipped and under-appreciated, the survey data show. After 13 years of war, the all-volunteer military is entering an era fraught with uncertainty and a growing sense that the force has been left adrift.

One trend to emerge from the annual Military Times survey is "that the mission mattered more to the military than to the civilian," said Peter Feaver, a political science professor at Duke University who studies the military. "For the civilian world, it might have been easier to psychologically move on and say, 'Well, we are cutting our losses.' But the military feels very differently. Those losses have names and faces attached to [them]."

According to the Military Times survey, active-duty troops reported a stunning drop in how they rated their overall quality of life: Just 56 percent call it good or excellent, down from 91 percent in 2009. The survey, conducted in July and August, found that 73 percent of troops would recommend a military career to others, down from 85 percent in 2009. And troops reported a significant decline in their desire to re-enlist, with 63 percent citing an intention to do so, compared with 72 percent a few years ago.

The reasons for the decrease are fully analyzed in the Military Times piece, which can be read in its entirety here, but a lack of leadership from Washington, uncertainty, lack of mission and draconian budget cuts seem to be the biggest reasons for the drop in morale.

With a lack of direction over the course of the past few years combined with suffocating rules of engagement that prevent troops from doing their jobs, these numbers aren't surprising but are extremely alarming for both the short-term and long-term health of the military as a whole. Less than one percent of the American population volunteers for military service. These morale numbers greatly threatened the incentive for good, committed people to sign up for service at all. Worse, according to the Armed Forces Foundation a veteran commits suicide every 65 minutes, which is 22 men or women every day.

Further, 73 percent of casualties during the Afghanistan war have occurred since 2009 when President Obama took office and changed the rules of engagement. The severe injury rate, meaning amputations, lost limbs and traumatic brain injury, has also skyrocketed over the past six years by 500 percent. Adding insult to injury the very system that is supposed to take care of injured troops, the Veteran's Affairs administration, has been manipulating care wait times for years, resulting in dozens of premature deaths.

"Harry Reid screwed this up all year long and President Obama and now Republicans are going along with the screwing of the military. I do not know why we bother to win elections when we turn around and screw the people we campaign on," conservative radio host Hugh Hewitt said on his show last night after an interview with Republican Senator Jim Inhofe.
Yesterday the lame-duck Senate released its detailed plan for the National Defense Authorization Act. The legislation cuts the pay raise for the military, imposes caps on basic housing allowance and imposes co-pays on prescription drugs totaling $5 billion in overall cuts.

When asked to explain the reasoning behind the cuts, especially when the federal government funds so much nonsense, the best Inhofe could come up with in the interview was, "We need a bill." Inhofe sits on the Senate Armed Services Committee.

As Hewitt points out during the interview, these cuts directly affect the men and women coming home from overseas who are experiencing PTSD and dealing with severe injuries. These cuts also directly impact their families right before Christmas time. It should be noted that the rate of severe injuries like lost limbs have skyrocketed under President Obama, and since 2009 the extreme injury rate for our troops in Afghanistan has gone up by 500 percent according to iCasulaties.org. Further, 22 military veterans and active duty soldiers commit suicide every day.

"I have to give voice to the people who have been writing me all day. They are pissed. And they are so upset that Republicans have agreed to this in order just to keep the record going. They really, I hope some Republican stands up and filibusters it. Maybe it will be you [Inhofe], because these men and women...they’re struggling with PTSD, they’re struggling with multiple deployments. They’ve got no money, no disposable income, and basically, what the lame duck Congress is doing is paying for the war in Iraq and Syria by cutting active duty servicemen’s benefits," Hewitt argued. "I think you guys should dig in…I think you guys should dig in and say damn, no, we’re not going to do this, we are not going to balance the Pentagon’s cuts on the backs of the military. And if you have to shut down the government, do it for the military."

Our military and veterans deserve better. They are owed a clear mission on the battle field and the security of their futures here at home should never be in question. When it comes to budget cuts, with all the frivolous things the federal government spends money on (like "Romance Projects," "Moosicals," video games and shrimp on treadmills), the men and women of the volunteer military should be the last on the list for slashing of funding. Period.