Hail Mary: Obama to Pull Out War on Women Rhetoric in Last Ditch Effort Before The Midterms 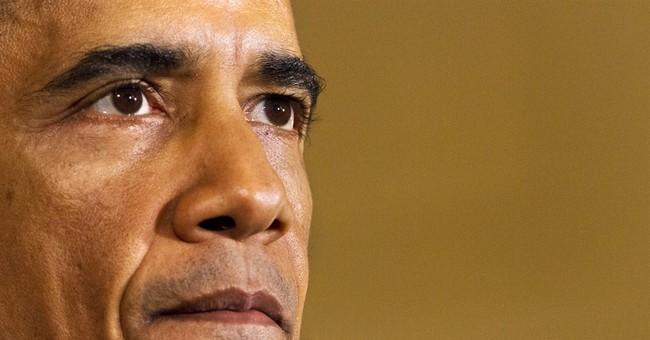 President Obama is set to give a speech this afternoon in Rhode Island and according to the Associated Press, "women's issues" and how Democrat policies can "help" women will be the subject.

President Barack Obama wants women to know what his administration is doing to help them succeed.

Four days before midterm elections in which Obama's fellow Democrats need a big turnout from female voters, Obama is delivering a speech Friday in Rhode Island on growth in the U.S. economy and administration policies directed at women.

Get ready for fear mongering about access to contraception. Will President Obama talk to women about why their health insurance premiums have skyrocketed under Obamacare? A piece of legislation he promised would be good for them? Will he explain why they can't keep their doctors after they were promised they could? Will the President explain to women why it isn't sexist to define them by the pills that they take? Will Obama give reasons for why he pays women less in his White House than men for the same job?

The war on women rhetoric, which is exactly what Obama's speech will be this afternoon, has fallen flat with many female voters in this election cycle. Overall, President Obama is underwater with women in swing states and with everything going on in the world, contraception being provided through federal government force isn't high on the priority list.

The president’s diminished standing with women is quickly becoming one of the biggest liabilities facing Democrats as they struggle to hang onto the Senate majority.

In battleground states across the country, Obama is underwater with female voters — especially women unaffiliated with a political party — and it’s making it harder for Democrats to take advantage of the gender gap, according to public polling and Democratic strategists.

Women have moved in the GOP's direction since September. In last month's AP-GfK poll, 47 percent of female likely voters said they favored a Democratic-controlled Congress while 40 percent wanted the Republicans to capture control. In the new poll, the two parties are about even among women, 44 percent.

A majority of Democrat candidates have purposely distanced themselves from President Obama this election cycle and there's no doubt that today's speech won't do much to encourage women to vote for more failed, patronizing policies.