State Department Memo: Non-American Citizens Who Get Ebola Should Be Brought to The U.S. For Treatment 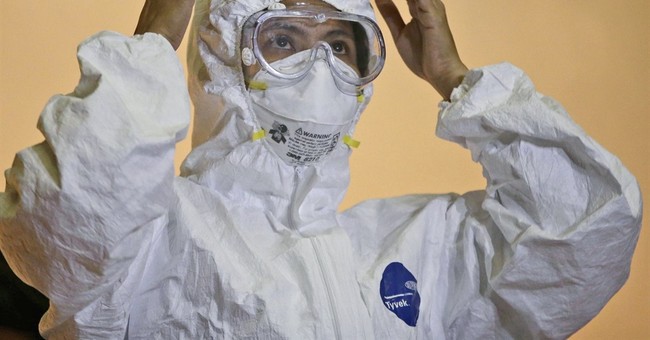 The Obama administration is still refusing to consider the implementation of a travel ban from West Africa to the United States, but officials aren't ruling out bringing non-American citizens who catch Ebola into America. In fact, a State Department memo shows officials making a moral case that some non-American citizens infected with Ebola should be brought to this country by the government for treatment at a cost of more than $300,000 per person for taxpayers.

The memo, first published by Fox News is titled, "Admitting non-U.S. citizens to the United States for the treatment of the Ebola virus" and argues that the U.S. could be the "logical treatment destination for non-citizens."

The State Department argues non-citizens working closely with the CDC and other agencies to combat Ebola should be treated in the U.S. should they contract the disease due to inadequate care in their home countries.

On page four of the memo, there is an admission that contracting Ebola as a non-citizen makes an individual ineligible for a visa due to a "significant" threats to public health and therefore executive action would be necessary to reverse the policy.

"Operationally, that requires an almost immediate request for medevac and approval for travel to the United States, as the medevac process itself is a two day journey. This presents a challenge, since under INA 212(a)(1)(A)(i), (implemented by 42 C.F.R. 34.2(b) and Executive Order No. 13295, as amended) Ebola Virus Disease is a communicable disease of public health significance and grounds for ineligibility," the memo states. "In order to permit the travel of such an individual either an INA 212(d)(3)(A) waiver of ineligibility would be required from the Department of Homeland Security)."

The White House has denied the existence of any plans to bring non-American citizens to the U.S. for treatment. Two healthcare workers who contracted the disease after caring for Thomas Eric Duncan at a Dallas Hospital, Amber Vinson and Amber Pham, have been successfully treated and are now free of the disease.