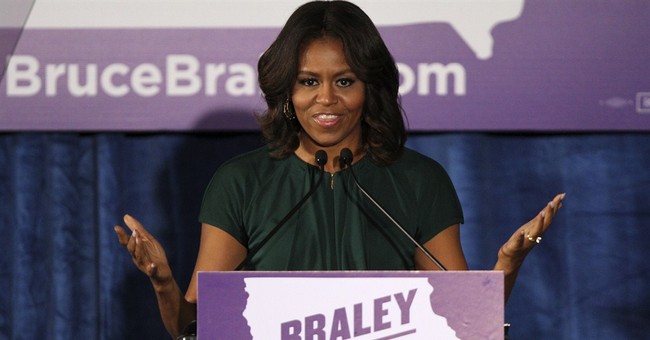 Democrat Congressman Bruce Braley is running against Republican Iowa State Senator Joni Ernst for a seat in the U.S. Senate. Braley is a trial lawyer and has had his own mishaps with statements on the campaign trail since announcing his candidacy to replace retiring Democrat Senator Tom Harkin. After all, Braley said during a campaign fundraiser earlier this year that Republican Senator Chuck Grassley is "just a farmer from Iowa who never went to law school." Now the White House, which is supporting Braley's campaign, is making things worse.

Two weeks ago First Lady Michelle Obama flew to Iowa to rally voters at a campaign event for Braley. When she took to the podium to give her speech, Mrs. Obama repeatedly called Braley "Bruce Bailey."

That gaffe prompted the Ernst campaign to purchase votebrucebailey.com, which leads directly to her campaign website.

To make matters worse, last night the White House sent out a transcript to the press showing support for Braley's candidacy for governor of Iowa. Braley is running for the U.S. Senate.

It is very obvious the Obama's support for Braley is completely genuine.The White House is supporting Braley, but has no idea what his real name is or what he's running for.