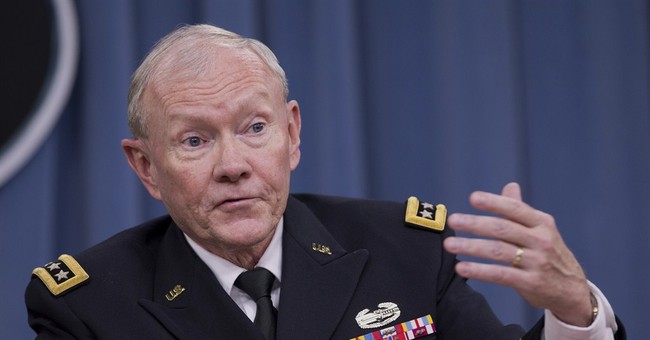 Testifying on Capitol Hill Tuesday in front of the Senate Armed Services Committee, Chairman of the Joint Chiefs of Staff General Martin Dempsey said that although "we're not there yet," the United States may eventually need to deploy U.S. ground troops to fight ISIS if a coalition and airstrikes fail to get the job done against the terror army.

“My view at this point is that this coalition is the appropriate way forward. I believe that will prove true but if it fails to be true and if there are threats to the United States then I of course would go back to the President and make a recommendation that we include the use of U.S. military ground forces. To be clear, if we reach the point where I believe our advisers should accompany Iraqi troops on attacks against specific ISIL targets, I will recommend that to the president," Dempsey said.

President Obama has been adamant about keeping U.S. combat troops from re-engaging in conflict in Iraq. Currently 1600 U.S. troops and military personnel are stationed in Iraq as advisors to local forces. Last week in a speech to the nation, Obama said he was sending nearly 500 more advisors to the region.

Thanks to Jim Hoft for the video.