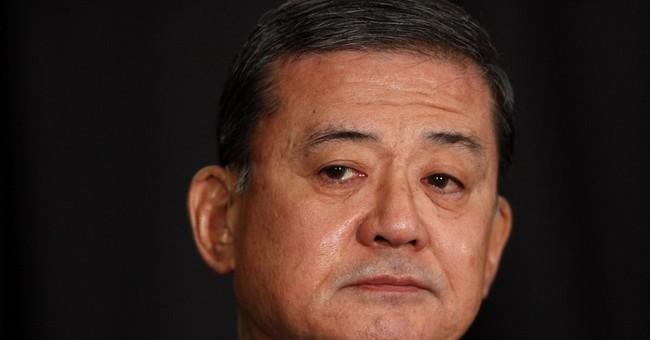 Embattled Veterans Affairs Secretary Eric Shinseki has offered President Obama his resignation. President Obama announced today from the White House he has accepted the resignation. The announcement came after a brief meeting between Shinseki and Obama at the White House. Obama has announced former President and Chief Executive Officer of the United Services Organizations Sloan Gibson will replace Shinseki as an interim secretary.

"Rick's judgement [is] that he could not carry out the next stages of reform without being a distraction himself," Obama said. "My assessment is unfortunately he's right...The number one priority is making sure things get fixed."

"I said we wouldn't tolerate misconduct and we will not. I said we had to do better and we will," Obama said.

"He's [Shinseki] a good man," Obama said. "Under his leadership we have seen more progress on more fronts on the VA and a bigger investment in the VA than just about any other VA secretary."

Laughably, Obama also said, "This is my administration and I always take responsibility for whatever happens." In an effort to explain the problem, Obama said scheduling problems are often a result of "old computers" and old scheduling systems, when in fact an Inspector General report released this week showed officials at 42 VA facilities were keeping secret wait lists as at least 1700 veterans waited more than 180 days for care. At this point dozens of veterans have died as a result of medical neglect.

Legion: Shinseki resignation the beginning, not the total solution. All incompetence/corruption needs weeded out. #VAaccountability

“Concerned Veterans for America fully supports President Obama’s decision to accept Sec. Shinseki’s resignation. More importantly, we emphasize that it doesn’t solve the widespread, systemic problems at the Department of Veterans Affairs. In fact, this is only the beginning. We need both reforms and a reformer, which is why it’s essential for Congress to pass systemic reforms at VA in the coming weeks and months, bringing real accountability, transparency, and choice to the Department of Veterans Affairs. The government is failing our veterans, it’s time to get to work fixing VA.” -CEO Pete Hegseth