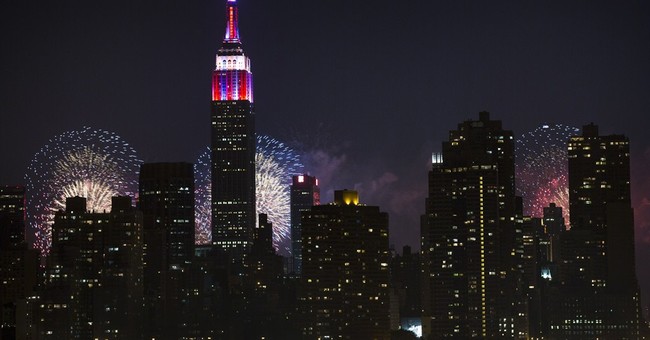 Individual liberty, rule of law, and economic freedom are central to what makes America unique in world history. Our success, our power, and our global influence rest strongly on the values on which this country was founded.

English author G.K. Chesterton once wrote, “America is the only nation in the world that is founded on a creed...It enunciates that all men are equal in their claim to justice, that governments exist to give them that justice, and that their authority is for that reason just.” The creed Chesterton refers to is, of course, the Declaration of Independence. This endowing document approved by Congress 238 years ago tomorrow proclaims that all people are created free and equal.

Sadly, an entire generation of young Americans is emerging from our schools and universities that is no longer being taught what it means to be an American. The cries of political correctness and the one world movement insist that teachers and professors not acknowledge excellence, either for individuals or for our country. It is all an effort to level the playing field.

However, much is to be said for American exceptionalism. The truth is that in 5,000 years of recorded human history, there has never before been a nation like America. A leader throughout the agricultural, industrial, and technological eras, America stands alone in the advancement of human innovation. When we think of America’s inventive genius, our country is responsible for the birth of technologies used around the world every day: personal computers, the internet, GPS, the lightbulb, the telephone, and the airplane.

This is the case made by Australian political figure Nick Adams, who believes it is “high time” for an outsider to speak to Americans’ hearts and outline to them what makes their country great. Adams held elective office as the youngest deputy mayor in Australian history at age 21 and has written the book, “The American Boomerang.”

“I’m here to give Americans optimism at a time where there are so many slumped shoulders. I must say that if I were an American, I would also feel that there is not much reason to be hopeful. I think it is indisputable that America is in decline as we speak. But decline, I believe, is a choice, it’s not a condition. Decline can be reversed. A lot of America’s current ailments are a result, I think, of policy failures. To use an Australian term, I think that America can boomerang provided that it re-embraces the values and the virtues of its founding principles and its history.”

Americans must rally and preserve our distinct value system if we are to “boomerang back to greatness.” Adams observes:

“It's optimism, not pessimism. It's patriotism, not relativism. It's faith, not secularism. It's life, not death. It's E Pluribus Unum, not multiculturalism. It's individualism, not collectivism. It's equality of opportunity, not equality of outcome.”

What will it take for America to boomerang? Adams explains that Americans need to unite behind a consensus-inspiring agenda. That agenda must be ending the waste, paying back the debt, axing political correctness, limiting the government, protecting the borders, preserving Judeo-Christian values, ending the culture of entitlement, cutting taxes, keeping the peace by unquestioned military advantage, and exercising fidelity to the Constitution.

You can read more in Nick Adams' book, out this week.