Excuse Me, What? John Kerry Holds Oceans Conference While Iraq is in Peril 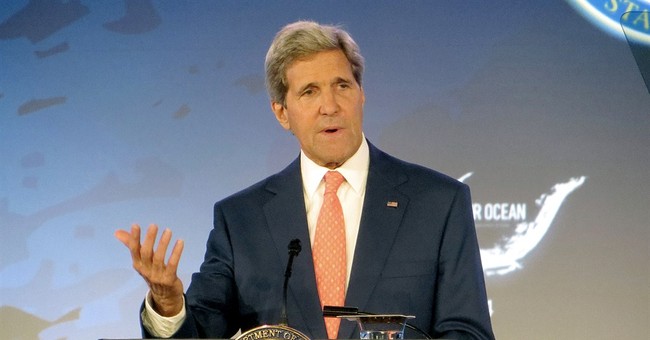 I promise this is not an article from The Onion.

Today, Secretary of State John Kerry decided that the most important issue he could possibly be addressing is the state of the world’s oceans.

What about the fact that Iraq is disintegrating before our very eyes? The Sunni radical group ISIS is attempting to create a caliphate state in the Middle East from inside Syria down through Iraq. Those who disagree are being brutally and viciously murdered in public.

However, I guess John Kerry had ample time to discuss the oceans today.

Besides the events occurring Iraq, it must be a slow day for news. Oh, wait.

What about the conflict in Ukraine? How about Marine Sgt. Andrew Tahmooressi who is being held in a Mexican jail? Who really cares about the projected 90,000 unaccompanied children pouring over our southern border? It is a dire humanitarian crisis.

Where is the Secretary of State? He is certainly not focusing on these issues.

In his Twitter Q&A, Kerry made sure to stress how great of an issue global ocean policy is:

We’re kicking off #OurOcean2014 because the threat to our ocean is too great to ignore. Join to make a difference: http://t.co/6VQtvjcEHp

Speaking to those in attendance of the meeting, he also made sure to emphasize just how urgent of a matter this is:

You are the ones who have brought that sense of urgency to this effort here. I might say that by being so rigid and so firmly planted we can say with certainty that the oceans movement is a hard-ass group of folks.

Not to mention, the press release also revealed that today, the oceans conference received commitments for action totaling over $1,450,000,000. Money well spent.

John Kerry seems to have a track record of not showing up for real events pertaining to his job.

He also apparently has an obsession with water. Let's all take a moment to remember the time Kerry went kayaking last year amidst the Egyptian military crisis:

It would almost be funny if it weren't so tragic.

The official U.S. Department of State website conveniently gives bullet points listing the duties of the Secretary of State. Here are a few:

- Serves as the President's principal adviser on U.S. foreign policy

- Advises the President on the appointment of U.S. ambassadors, ministers, consuls, and other diplomatic representatives

I believe it's just about time for John Kerry to review his job description.