Cynicism: Democrats Insist on Delaying New Kavanaugh Hearing They Demanded, After Sitting on Allegation for Months 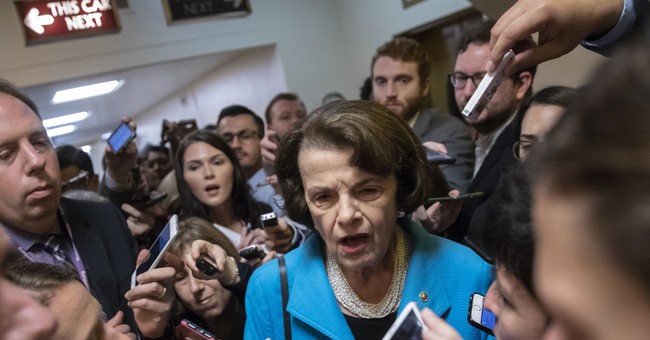 As I've said many times over, I do not know whether Brett Kavanaugh's accuser is acting in good or bad faith, nor does virtually anyone else.  She could be lying.  He could be lying.  Or they could both be telling what they firmly believe to be the truth, based on an array of faulty, hazy or false memories.  What matters now is how we assess the available evidence, of which there is precious little.  Earlier, I laid out my own attempt at erecting some reasonable, if imperfect, metrics for doing just that.  Setting aside the veracity of Prof. Ford's unsubstantiated claim, I very much harbor increasing suspicions about the motives and behavior of Senate Democrats.

Recall that Sen. Dianne Feinstein -- who just yesterday admitted that she doesn't know if Ford is being entirely truthful -- has had Ford's allegations in her possession since July, well before Kavanaugh's confirmation hearings were even scheduled.  Over the summer, she reportedly told her colleagues that the accusations were too distant to merit serious scrutiny.  Then, after the hearings concluded, someone (certainly a Democrat) leaked the existence of the accuser's letter, apparently violating Ford's explicit wish to remain anonymous.  This development inevitably led to the emergence of Ford's claims, conveniently timed to detonate during the very short window between the hearings and the Senate Judiciary Committee vote.  Republicans and Democrats alike seem to be frustrated with Feinstein's handling of the entire matter.

With the allegation out in the open, Democrats loudly declared that Ford be allowed to make her allegations publicly, on the record, and under oath.  They demanded new hearings.  Republicans, who control the committee, promptly agreed, setting a date for next Monday.  In doing so, they abided by the panel's rule dictating that members must be notified of a new hearing one week in advance.  Democrats responded by pivoting to a new complaint: The hearing they said must happen is now happening...too soon.  The FBI needs to investigate the issue before any additional steps are taken, they now say.  The accuser's attorneys are echoing Democrats' new stance, though they still have not entirely ruled out Ford's participation in Monday's scheduled session (remember, her primary lawyer went on national television earlier this week and said her client was prepared to testify).  Ed Morrissey raises another problem with the actions of the accuser's representatives:

Ford’s legal team is engaging in bad-faith posturing on those points, but they added a shabby accusation against Grassley as well. The letter accused Grassley of planning to seat Ford “at the same table” as Kavanaugh, but Grassley responded yesterday by saying that no one had planned the two to appear together. They would have appeared at “the same table,” but at two different times.

But it's the Democrats' conduct here that strikes me as particularly cynical goalpost shifting, for several reasons:

(1) The FBI has already declined to launch an investigation into this 36-year-old claim, for which there is no alleged crime scene or date.  Ford says she doesn't know where the house was, and can't even narrow down the encounter to any specific month of 1982.  This not only renders any criminal investigation hopeless, it also forecloses any possibility for Kavanaugh (or any of the other three boys alleged to have attended the party) to potentially provide an accusation-destroying alibi.  The Bureau, which has already performed six background checks on Kavanaugh, inserted the allegation into Kavanaugh's background file.  There's nothing more to be done.  Insisting on their resumed involvement, with no jurisdiction, or even a clear or realistic goal, smells like yet another delay tactic.  I'll return to this theme later.

(2) The counterpoint on FBI involvement is that the Bureau did "investigate" Anita Hill's allegations against then-nominee Clarence Thomas (which also dropped after his hearings ended, by the way).  As others have noted, however, that was a matter between two federal employees -- and that "investigation" involved a collection of relevant parties' statements, which nobody had at that time.  In this case, we already have the statements of the accuser, the accused, a supposed eyewitness, and now another witness Ford has placed at the scene.  Via CNN:

Patrick J. Smyth was one of two boys other than Kavanaugh and Mark Judge who Ford asserts was at the party—and he completely rejects her claims. Smyth’s view would be particularly significant in any weighing of evidence, given that he is not alleged to have done anything wrong. https://t.co/v4ooNwIUPG

Lying in a letter to the committee is a crime, incidentally.  Some liberals, including CNN employees, are downplaying this update, chiding conservatives for wrongly "seizing" on it.  This is ludicrous.  We have very, very few actual facts to try to verify, based on Ford's allegation (which, yes, contains some gaps and inconsistencies).  One of those possible facts is the list of attendees (the number of whom has shifted) at the house that night, as she remembers it.  This is one of those people stepping forward and disavowing any knowledge of her allegation and vouching for Kavanaugh's character.  If that's irrelevant, then what are we allowed to count as relevant?  As a side note, someone purporting to be a high school friend of Ford's published, then deleted, a tweet and Facebook post earlier today, in which she claims that she was aware of the attempted assault shortly after it is said to have occurred.  The problem with that fleeting assertion, or any similar unverifiable assertions that may arise in the coming days, is that Ford herself is on the record as saying that she didn't tell anyone about it for 30 years:

Ford “told no one at the time what had happened to her.” https://t.co/ZPWMCzP5mJ pic.twitter.com/vfnxXMG7GB

If we are to believe Ford's memory -- which is the whole basis of this entire case -- anyone now belatedly attesting to contemporaneous knowledge of the alleged incident must be viewed with significant skepticism.  They're contradicting her.  Or she's misremembering a crucial detail, which presents a separate problem. (UPDATE: The aforementioned woman now says she has no firsthand knowledge of the situation and is refusing to comment further).

(3) The "we need much more time" grousing from Democrats is particularly brazen, given both their endless delay efforts in other facets of this nomination battle, and the fact that Feinstein kept a lid on this for two months.  You don't get to bury something for weeks on end (downplaying its significance in private before hyping it as hugely consequential in public), and then stomp your feet about how the eleventh-hour grenade you chucked, at the tail end of the process, isn't being adjudicated as deliberately and thoroughly as you want.  It's so transparent.  If Democrats had wanted this to be explored at length, they could have brought the issue to the fore at the beginning of the process.  They didn't.  But hey, at least Democratic members of the committee aren't publicly floating a partisan plot to derail Kavanaugh, then hold his seat open for two full years, right?  Oops:

Hawaii Sen. Mazie Hirono (D.) said Democrats could keep the open seat on the Supreme Court vacant until after the 2020 election if Brett Kavanaugh's nomination collapses and Democrats regain control of the Senate in November..."I think we’ve had those kinds of vacancies before, and we certainly had over a one-year vacancy with Merrick Garland," Hirono told Politico Magazine. "So the world does not come to an end because we don’t fill all of the nominees."

This is known as "giving away the game."  Democrats do not deserve the benefit of the doubt in this drama because their actions have surrendered and squandered any presumption of good faith.  I'll leave you with Stolen Valor disgrace Richard Blumenthal calling for Kavanaugh to withdraw (based on no new evidence or information), followed by a hint from a top Kavanaugh ally that "much more" exculpatory information may be forthcoming:

This guy was proven to have lied his ass off about serving in a war for his entire political career — and now he wants to ruin someone else’s career based on a single unproven accusation, hand-wringing about “staining” the Court’s credibility. An impolite response comes to mind. https://t.co/cqIytmM2FU

A horrific incident similar to the one the accuser alleges may well have occurred. But if so, she's got the wrong guy. Kavanaugh wasn't present, as this and much more will confirm.https://t.co/7Z4pwr7urR