No, Trump Didn't 'Erase' LGBTQ People From the US Census 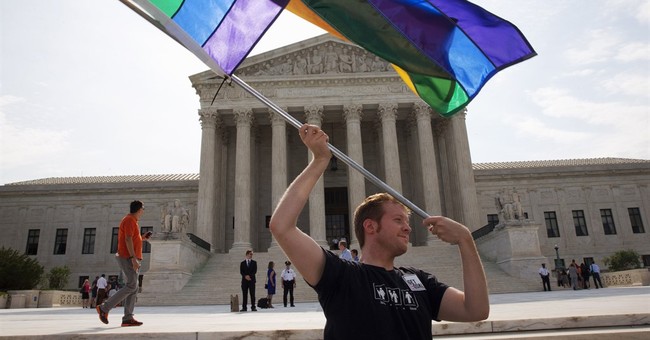 If you were to read some of the more hysterical headlines being churned out by certain elements of the gay press -- which are, in turn, being shared far and wide by and among the Left's outrage industry -- you might be forgiven for concluding that President Trump has just ordered an act of statistical genocide against the LGBTQ community. "We've been erased!" blares the title of a post on the National LGBTQ Task Force's website, while other outlets have prominently featured Trump in their ledes.  Here's a representative tweet from the left-wing Human Rights Campaign, which is currently agitating on behalf of Democrats' indefensible and unprecedented would-be filibuster against Neil Gorsuch:


The truth, alas, is much more complicated than the hyperventilators' click-bait would suggest.  An article in The Hill explains the some of the decidedly un-dastardly context:

The Census Bureau’s 2020 survey will not ask about respondents’ sexual orientation or gender identity, dashing LGBT rights groups’ hopes that the new questions would be added and raising concerns that the Trump administration may have squelched the proposal. In a message to Congress sent Tuesday, the Census Bureau laid out the topics it plans to cover in the 2020 Census, when every American household will be asked to provide data about residents’ gender, race, ethnicity and other topics. By law, the Census Bureau must inform Congress three years before the decennial survey about the topics it plans to cover. An initial draft published online Tuesday morning showed the agency planned to ask respondents about their sexual orientation and gender identity, among the 51 other categories of questions. But a final version published Tuesday afternoon did not include the sexual orientation and gender identity questions — SOGI, in Census parlance — among the proposed topics...

The Census has never included questions about sexual orientation and gender identity in its surveys. But the Bureau did include an option that allowed respondents to identify themselves as part of a same-sex relationship in the 2010 Census, and several other agencies ask about sexual orientation and gender identity in their own surveys, many of which were designed with the Census Bureau’s help. Gay rights groups hoped that the next Census would include the SOGI questions. Some Census experts said the decision may not be meant as a political statement. The Bureau takes years to test new topics to be included among their questions, and while the agency has been researching sexual orientation questions, they may not have finalized that research or figured out just how to phrase the questions they ask.

The Census has never included these questions before, and experts on the process warn that the details of inserting new categories and topics into the official survey can take years to iron out and implement.  As Jazz Shaw points out, the current director of the Census Bureau, John T. Thompson, was nominated by President Obama in 2013, and was confirmed unanimously shortly thereafter by a Democrat-controlled Senate.  That is the individual who is overseeing this process.  To that point (and to his credit), a leading scholar of LGBTQ demographics is admonishing gay rights advocates against leaping to unfair conclusions about the motivations behind the decision to omit certain new Census questions for 2020, via the Washington Blade:

Lots of inaccurate news abt US Census #LGBT inclusion. There were never plans for LGBT ?s in '20 Census/ACS @chrisjohnson82 @huffpostqueer

@chrisjohnson82 Proposal was just to consider ?s for future. No decisions were made and way too late to add new SO/GI items to 2020 surveys.


For what it's worth, I would welcome the addition of LGBTQ questions to the US Census (and, as ever, I believe most inquiries should be optional); it would be interesting and instructive to see how many Americans self-identify with that community, as I do.  And while the science is settled that there are only two biological sexes, some of our fellow citizens' own gender identities exist beyond those traditional strictures, so giving them a formal method through which to stand up and be counted strikes me as a reasonable step.  If Dr. Gates is correct that it's "way too late" to "add new SO/GI item to 2020 surveys," perhaps the relevant players can get on the same page ahead of the next round.  Finally, to pin this week's development on Trump is absurd.  He is, without question, the most pro-gay rights Republican president in American history, having recently overruled social conservatives' objections (some of which were reasonable) in keeping Obama-era LGBTQ executive protections in place. Americans from across the ideological spectrum would be well-served to take a breath and examine the facts before dialing their fury meters up to eleven.