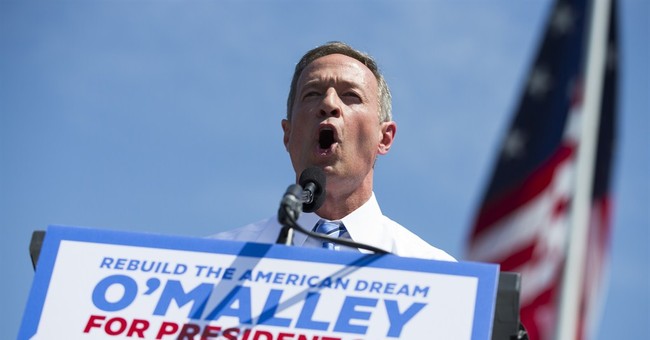 In case you missed it -- and we can't blame you if you did -- former Maryland Governor Martin O'Malley announced his candidacy for president over the weekend. The Democrat's odds are extremely long, for reasons enumerated in Leah's post, but that doesn't mean O'Malley can't serve a purpose.  Self-described Socialist Bernie Sanders is running to Hillary Clinton's ideological left, and O'Malley will do the same.  But Sanders seems to have gone out of his way to avoid hitting the Clintons, couching his critiques of their money "hustling" with 'far-be-it-from-me-to-judge' caveats, and generally eschewing negative campaigning altogether.  He's a radical idealist; he isn't someone who seems prepared to get his hands dirty to scuff up the 800-pound political gorilla he's chasing. That's not the case with Martin O'Malley.  He's a Baltimore brawler of a politician, and his announcement speech and subsequent sit-down with recently-discovered Clinton Foundation donor George Stephanopolous signaled a willingness to fire salvos across Hillary's bow:


He's not exactly taking the gloves off there, but knocking the party's presumptive nominee over her documented Wall Street chumminess and gutlessness on trade ain't nothing.  There's a reason why Clinton's monied supporters aren't genuinely worried about her ludicrous "topple the rich" posturing, which she adopts for the sole purpose of placating the rabid class warriors who populate her party's base. O'Malley is unlikely to emerge as a redoubtable challenger to the Hillary Death Star, but perhaps by actively pressuring her to stake out positions, he may help further divorce her from her husband's brand of relative political moderation.  For what it's worth, O'Malley's opening act suffered from several hitches: A video presentation didn't work, and several 'black lives matter' protesters heckled him during his remarks.  Bigger picture, this is a man whose tax-and-spend orgy of failed Statism compelled Maryland's very liberal electorate to vote in a Republican to succeed him, rather than his hand-picked Lt. Governor.  And it ended up being a relatively comfortable win for now-Governor Larry Hogan: 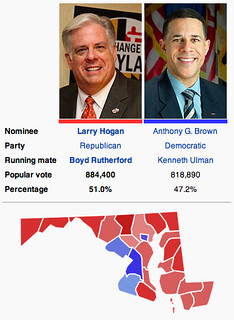 Meanwhile, Hillary's primary lead is so commanding, and the Democratic field so weak, that she doesn't need to pander to the party's hard Left.  But she still seems to be jittery over her scarring 2008 experience, in which a relatively unknown opponent swooped in from the left and won the nomination right out from under her nose.  Plus, laughable pandering is built into Hillary Clinton's DNA.  She can't help herself:

UPDATE - Another reminder of the real hunger among hardcore lefties to nominate someone other than Hillary Clinton, whom they consider to be too conservative: