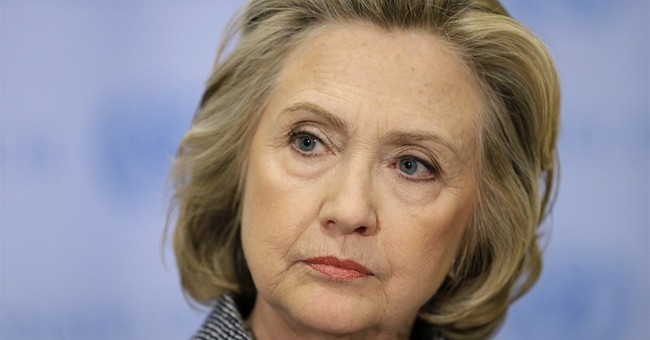 A few interesting nuggets in CBS News' new poll, which is all about Democrats' inevitable 2016 nominee:

(1) Hillary Clinton's favorability rating is upside down by double-digits, at (26/37), with a staggering 36 percent of respondents declaring themselves undecided or insufficiently informed to say either way. The less-than-impressive favorables isn't great news for Team Hillary, but I wonder how they view that huge number of uncommitteds. On one hand, she'll pound the First! Woman! President! drum loudly and proudly from wire to wire in an attempt to make the election a referendum -- not on her, per se, but on the idea of having any 'her' as president. There's upside there. On the other hand, Hillary is about as known a commodity as exists in American politics, yet about a third of voters at least claim that they're waiting for someone to help define Hillary Clinton in their minds. That's an opening for Republicans, obviously.

(2) Hillary fares better on leadership qualities (57/38 favorable), meaning that the GOP has a long way to go to discredit her very rocky tenure at State. Voters are more likely to say that she "cares" about people like them than not (56/39), but the gap isn't as comfortable as she'd like it to be. There's fertile ground to attack here, too, given the Clintons' deep Wall Street ties and immense wealth -- to say nothing of Hillary's out-of-touch aloofness, or the controversy surrounding the Clinton Foundation's finances. Barack Obama crushed Mitt Romney on this metric in 2012.

(3) She earns low marks on honesty, with voters splitting (42/47) on whether she's "honest and trustworthy." Those numbers are kept afloat by Democrats overwhelmingly pretending they see her as honest; Republicans and independents break sharply in the other direction. Her performance trying to spin away her reckless and opaque email scheme could not have resonated as forthcoming to any fair-minded person who actually watched that spectacle.

(4) Speaking of emails, nearly two-thirds of respondents say Hillary's use of a private email system to conduct official business was inappropriate, though they split evenly on whether they're satisfied by her "convenience" explanation. I continue to believe that the most potent argument the GOP has at its disposal is to highlight how utterly reckless and risky this practice was from a national security perspective. Sure, they can add that she was breaking the rules, and possibly the law -- and that her State Department sacked an ambassador in part for violating the "clear-cut" rules -- but sacrificing national security for your own "convenience" (her explanation) or to thwart transparency protocols (the real explanation) packs the biggest punch.


A pro-Hillary front group, meanwhile, is already warning people that they're going to be on the hunt for sexist criticisms of their candidate, with "sexism" being very broadly defined:

A group called HRC Super Volunteers just warned me "We will be watching, reading, listening and protesting coded sexism..." (1/2)


Also sexist, according to HRC Super Volunteers: "Secretive" and "will do anything to win, represents the past, out of touch..."


Why, it's almost as if the Left's Outrage Circus wants to shut down debate by delegitimizing opponents' arguments, rather than having an open and robust discussion. Someone should really write a book about that insidious phenomenon. Over on the GOP side of the world, a Wall Street Journal analysis suggests that the 2016 may be the longest and most expensive Republican primary in recent memory:

The candidate field looks unusually crowded, with more than a dozen contenders appealing to different slices of the GOP. The rise of super PACs allows candidates to stay in the race longer than before. And nominating rules meant to compress the process may complicate a front-runner’s ability to amass the delegates necessary to win…The potential for an extended primary stems from what many Republicans believe to be a positive development: a crowd of viable candidates expected to run in 2016 and a set of GOP donors who appear eager to finance their bids...The size of the GOP field and the absence of an obvious front-runner means campaigns will have to devote more time and money to the often-grueling hunt for individual delegates, veteran strategists say. Some warn that if three or four candidates emerge from the early nominating contests in February and early March with a significant share of convention delegates, none may claim the roughly 1,100 to 1,200 delegates needed to clinch the nomination.


This is why some smart folks like Sean Trende are talking about a brokered convention as a potential reality, not a farfetched, dream-come-true scenario for political nerds. For what it's worth, here are the latest numbers out of New Hampshire:

There’s about ten months to go before New Hampshire’s first in the nation presidential primary, but a new poll in the Republican race was released Thursday. Former Florida governor Jeb Bush leads the Suffolk University poll of likely GOP Primary voters with 19-percent. Scott Walker was second with 14-percent and Rand Paul was third at 7-precent. Donald Trump had 6-percent. Chris Christie and Ted Cruz were tied with just 5-percent.


Trump is ahead of Christie and Cruz? Yeesh.