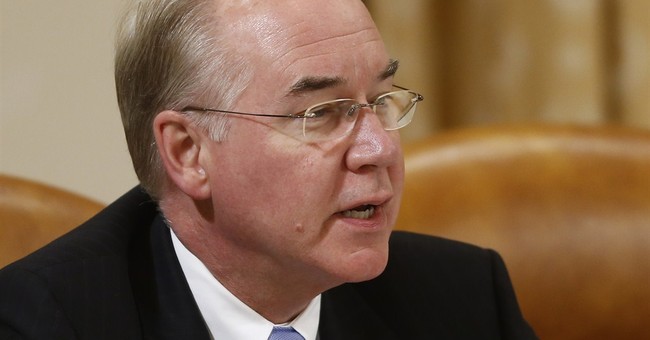 House Republicans produced their federal budget blueprint for fiscal year 2016 today, with new House Budget Committee Chairman Tom Price hailing the plan as "a balanced budget for a stronger America." The offering would reduce projected federal spending by an ambitious $5.5 trillion over the next ten years, achieving balance within eight -- without raising taxes. It increases overall spending during that budget window, but at a significantly slower rate of growth the current trajectory.  Spendthrift Democrats, naturally, would prefer to accelerate spending growth across-the-board, despite record debt, massive unpaid-for promises, and deficits that are projected to climb back to $1 trillion annually in the coming years. Price's committee released a short, optimistic video summarizing their fiscal roadmap:


Here's how they summarize some key points of their document:

- Balances the budget in less than 10 years without raising taxes, in contrast to the President whose budget never balances

- Repeals Obamacare in full – including all of its taxes, regulations and mandates • Promotes freedom of choice, affordability, and patient-centered health care solutions • Eliminates IPAB, an unelected, unaccountable board of bureaucrats charged with making coverage decisions on health care

- Provides for a strong national defense through robust funding of troop training, equipment and compensation • Boosts defense spending above the president’s levels while putting in place a plan to responsibly address the current spending caps and the threat of sequester

You can read the full proposal here; Chairman Price's USA Today column summarizing his budget is here.  The plan is rather similar to recent iterations advanced by erstwhile Budget Committee chief Paul Ryan, including its full repeal of Obamacare and necessary, bipartisan Medicare reforms for future seniors -- which Democrats have lied about for years.  Two interesting notes about the FY '16 version is that it effectively transforms food stamps into state-run programs via block grants, similar to the Medicaid reforms included in previous years' versions (as well as this year's).  It also hikes military spending over sequester-enforced limits, a demand that defense hawks have been voicing for some time.  They pay for these increases with a bit of gimmickry, which Ed Morrissey argues is actually pretty defensible as far as these things go.  Price also describes reductions in spending on federal benefits, including the elimination of costly and problematic loopholes:


There is no shortage of waste, fraud and abuse across government agencies which is why we propose reforms that would make those programs that do serve an important purpose more efficient, effective and accountable. For example, we propose (details not public yet) closing the double-dipping loophole in the disability insurance program that allows an individual to receive both unemployment insurance and disability payments. No one ought to be held eligible for both benefits at the same time, and this budget would protect taxpayers and maintain the integrity of these programs by ending this wasteful practice.


The White House has already rejected House Republicans' blueprint out of hand, sounding the usual demagogic notes about hurting the poor and helping the rich. President Obama's 2016 budget never comes close to balancing, despite trillions in requested tax increases, would add an estimated $8.5 trillion to the national debt over the current budget window, and does virtually nothing to address America's unfunded liability crisis -- which Obama used to acknowledge.  But his good government pantomime ended long ago.