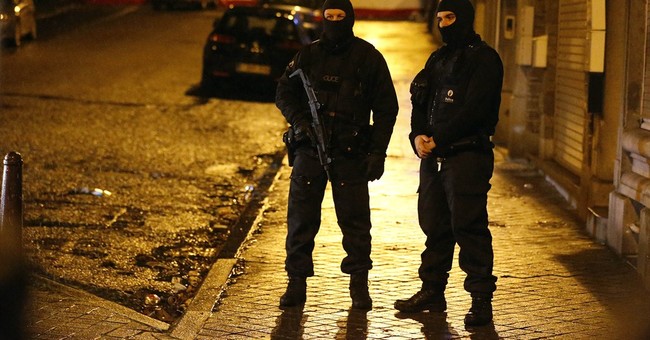 Some in the West prefer not to consider themselves at war with radical Islam, refusing to even call the threat by its name. But radical Islamists aren't the least bit murky on this question. Following the Charlie Hebdo massacre and subsequent hostage situations in Paris, Belgian authorities have foiled "major terrorist attacks," which they say included a plot to murder police officers.  Here's nighttime video of the initial (lethal) raid, followed by a news account:


The plan was to gun down law officers in Belgium's streets or at police stations, possibly disguised in police uniforms themselves. But police stopped suspected terrorists in the city of Verviers in a raid Thursday night just before they were about to strike, Belgium's federal prosecutor said Friday. "Could have been hours, certainly no more than a day or two," Eric van der Sypt said. Officers killed two suspects, and wounded and arrested a third in Thursday's operation...overnight, police fanned out across Belgium in 12 raids, where they arrested 12 people in various cities, including the capital, Brussels, van der Sypt said. They got everyone on their list. In France, police also made 12 arrests on Friday in last week's slaying of 17 people -- at satire magazine Charlie Hebdo, a kosher store and during a police stop. Two of those arrested were Belgians and will be extradited, van der Sypt said. But there does not appear to be any connection between the shootings in Paris and the terror plans in Belgium, he said.


No direct connection at least.  Remember this frightening report about jihadis from Western nations deploying to fight with ISIS, receiving training, then returning home to terrorize innocents?  That's exactly what appears to be happening, with intelligence officials warning that multiple ISIS-affiliated "sleeper cells" are being activated across Europe:

A Western Intelligence source tells CNN that the ongoing terror threat appears to involve up to 20 sleeper cells of between 120 to 180 people ready to strike in France, Germany, Belgium and the Netherlands. The source said that European Union and Middle East intelligence agencies identified an "imminent threat" to Belgium, possibly also to the Netherlands...The Belgian counterterrorism official said indications of ISIS ordering attacks in Europe mark an apparent significant shift by the terrorist group.


Remember, the chief of Britain's MI5 security service gave a speech last week -- prepared for delivery before the Paris attacks -- warning of mass casualty attacks.  It's unclear how many of these fighters and threats are core Al Qaeda, versus 'Khorasan,' versus ISIS, but it's now obvious that alarm bells are sounding throughout the western intelligence community.  And since we're on the subject of ISIS, Katie posted horrific video of the group's ongoing monstrosity, and the Wall Street Journal published a splashy story yesterday detailing the grim reality that US airstrikes have not curbed the terror army's advance in Syria:

More than three months of U.S. airstrikes in Syria have failed to prevent Islamic State militants from expanding their control in that country, according to U.S. and independent assessments, raising new concerns about President Barack Obama’s military strategy in the Middle East. While U.S. bombing runs and missile strikes have put Islamic State forces on the defensive in Iraq, they haven’t had the same kind of impact in Syria. Instead, jihadist fighters have enlarged their hold in Syria since the U.S. started hitting the group’s strongholds there in September, according to the new estimates. Islamic State’s progress in Syria is partly the result of the U.S. decision to focus its military efforts on Iraq, where the militant group has seized major parts of the country and declared them part of a new Islamic caliphate. The U.S.-led military effort has pushed the forces out of some key battlegrounds in Iraq. But Syria still serves as a haven for Islamic State fighters...


The Daily Beast printed a similar report this week. The US has "non combat" ground forces in Iraq, and they seem to be making real progress in reclaiming areas seized by ISIS after the Obama administration withdrew all ground troops from the country (rejecting Obama's previous plan to keep a targeted residual force in place), and the Iraqi security forces proved incapable of defending the country's sovereignty.  Since then, ISIS' advance has plunged the region into further chaos, and flipped the switch on a strong magnet that has been attracting violent Islamists from across the globe -- including hundreds of Americans, like these three intercepted teenagers from Chicago.  Iraq and Syria feel far away, but when the terrorists return home, the war becomes real.  And as the White House continues its Guantanamo Bay fire sale (releasing five Yemeni detainees into neighboring Oman this week), I'll leave you with this comforting report out of the country we're scheduled to abandon next:

An offshoot of the Middle East's Islamic State insurgency has begun operating on southern Afghanistan, less than three months after British combat troops withdrew from the region. A man identified as Mullah Abdul Rauf was actively recruiting fighters for the groups, flying black flags and, according to some sources, even battling Taliban militants. Local sources said Rauf, a former Guantanamo Bay prisoner, had set up his base in Helmand province and was offering good wages to anyone willing to fight for the Islamic State.


Rauf was released from Gitmo during the Bush administration, and is now setting up ISIS' outpost in Afghanistan, underscoring the terrible jihadist recidivism problem. Will any of these guys end up joining him?