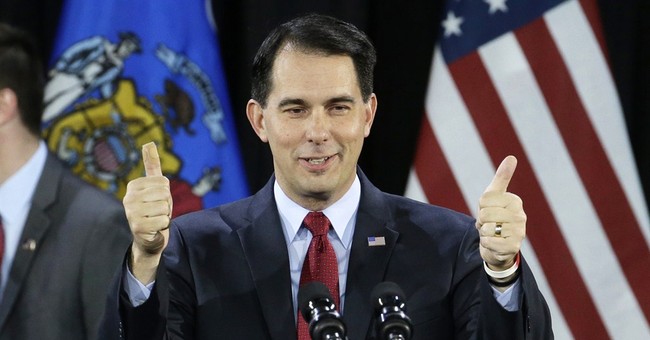 The early 2016 presidential field continues to take shape with Wisconsin Governor Scott Walker making several moves that point to a likely run. Earlier in the week I spoke with someone with a window into the governor's operation who told me that the chances of Walker running are probably north of 70 percent at this stage, although no final decision has been made one way or the other.  CNN reports that Walker took a significant step toward entering the fray, making a key hire and laying the groundwork to launch a political operation:

Wisconsin Gov. Scott Walker will launch a new political organization in the coming weeks and has tapped a national political strategist to serve as his campaign manager should he decide to run for president, multiple GOP sources told CNN. Walker, who was sworn in to a second term in Madison this week, quietly brought on Rick Wiley, a former Republican National Committee political director and veteran of multiple presidential campaigns, about a month ago to build a political operation in advance of the 2016 race, the sources said. Walker's moves are the latest in a swirl of recent activity from big-name Republicans eyeing a White House bid...Wiley, who declined to comment on the job, has been aggressively reaching out to potential staffers in recent weeks. And Walker himself will attend the RNC's winter meeting in San Diego next week to meet with committee members, including delegations from the early primary and caucus states that kick off the presidential nominating process. One source close to Walker told CNN that the governor has no timeline for announcing a presidential bid but will be forming "some kind of entity in the coming weeks to lend itself as a vehicle" -- likely a leadership PAC -- before moving forward with a full-blown campaign.


Beyond these nuts-and-bolts maneuvers, Walker is sounding more and more like a man with presidential ambitions. He's offered his opinion that America's next chief executive "should be a governor," told Hugh Hewitt that he has "absolutely not" ruled out a 2016 candidacy, and rolled out a clever new response to questions about his lack of a college degree as a potential handicap:

“I’m like the majority of people in America,” Walker told Hugh Hewitt. “I’m someone who went to college, had the opportunity in my senior year to go and take a job full-time, which was not the only reason I went to college, but one of the biggest reasons was to get a job.” Then he got married and started a family. “Like a lot of folks in America, you know, your family and your job take the time away from you finishing it up,” Walker continued. “I’ve got a master’s degree in taking on the big government special interests, and I think that is worth more than anything else that anybody can point to.”


That he does, which is why he would make for a formidable candidate with a proven track record, both electorally and on policy.  I've made no secret of my admiration for Walker, marveling from afar as he's forged his way through several high-stakes crucibles, sustaining incoming fire from all directions, and prevailing every time.  Who else can tell primary voters, "the Left threw everything they had at me, and we still passed our historic reforms -- oh, and I beat the Democrats three times in four years in a purple-ish/blue state"?  His resume and story are flat-out compelling.  Plus, he may be one of the few national figures positioned to earn the trust of the GOP establishment and grassroots.  John Nolte built the case in fewer than 140 characters just yesterday:

Walker=TESTED under fire by left, media. Conservative. Exec experience. 3 Blue State victories. Can get base out in general. Jeb can't.


Back to the education issue. While it's true that more than two-thirds of Americans do not hold college degrees, the Washington Post notes that having no academic credentials beyond high school would he highly unusual for a president in the modern era. Walker still has the option to complete his education at Marquette; he is reportedly just a few credits shy of the finish line. He also leapt into a Twitter duel with fellow governor Chris Christie this week, needling the New Jersey governor for his hug-seen-round-the-internet at last weekend's Dallas Cowboys playoff game:

This is the type of owner I'll be looking to hug after a #Packers win on Sunday: pic.twitter.com/W20LRO5oMM


I suspect Walker will watch the game from the stands, not a suite. Christie's amusingly photoshopped reply:

.@GovWalker don’t worry… there are enough awkward hugs to go around. pic.twitter.com/gFTItWqPVO


Speaking of Christie, the Washington Post reports that Jeb Bush's early and aggressive entrance into the race may force the New Jersey governor to accelerate his decision-making timeline.  Christie had been shooting to make his first foray on this front in February; now he may move later this month.  Bush, meanwhile, has said he'll release a ten year trove of tax returns and met with major donors in Connecticut, raising serious money for his newly-formed PAC.  The action has started.  You know who appears to be acutely aware of that fact?  A familiar face whose one-time strenuous denials are looking less concrete by the day:

Former Massachusetts governor Mitt Romney will be meeting with four of his key advisors from his 2012 presidential run tonight, according to the Washington Post and confirmed by Kelli Harrison, a spokesperson for Romney. He "has been encouraged by his allies to consider another run for the White House, the Washington Post continues. While rumors of Romney's 2016 candidacy have been quelled time and again, some of "Romney associates, including prominent donors and consultants, have privately insisted that he remains interested in a possible return to the national stage..."


In other 2016 news, Mike Huckabee parted ways with Fox to contemplate a run, former HP executive and Senate candidate Carly Fiorina is staffing up, and Dr. Ben Carson is being subjected to the unforgiving glare of the national spotlight.  He's apologized for instances of plagiarism discovered in one of his books, and exposed this week by Buzzfeed.  The calendar has barely flipped over from 2014. Temperatures across the country are frosty. And the presidential campaign is already warming up.  I'll leave you with Walker's latest inaugural address: