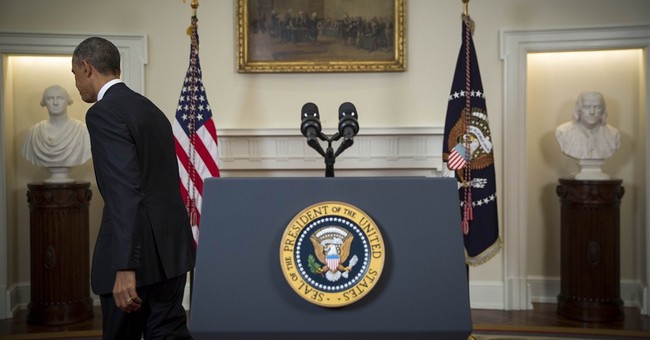 Josh Earnest announced yesterday that President Obama will meet the media for a year-end press conference later on today. In light of the White House press corps' track record of feeble, lethargic performances at these types of exchanges in recent years, I figured I'd offer a small sampling of questions that might be appropriate to put to the president.  These aren't comprehensive, but they're a start:

(1) Mr. President, here is what you said about using executive power to suspend deportation for millions of illegal immigrants in 2011: "With respect to the notion that I can just suspend deportations through executive order, that’s just not the case, because there are laws on the books that Congress has passed...for me to simply through executive order ignore those congressional mandates would not conform with my appropriate role as President."  Then, after you unilaterally implemented DREAM Act-style enforcement discretion for minors in 2012, you said "I've done everything that I can on my own," adding, "if we start broadening that [action], then essentially I would be ignoring the law in a way that I think would be very difficult to defend legally."  Was your legal assessment of the limits of your own authority inaccurate at the time?  (Be equipped with this information for a possible follow-up).

(2) On a related note, when you were a candidate for president, a central theme of your campaign was criticizing what you called your predecessor's inappropriate arrogation of executive power, at Congress' expense.  You told a crowd of supporters, "The biggest problems that were facing right now have to do with George Bush trying to bring more and more power into the executive branch and not go through Congress at all, and that’s what I intend to reverse when I’m President of the United States of America."  Some -- including prominent liberals -- would argue that your views on that 'big problem' have evolved ever since you attained that power.  Do you agree?

(3) The Hill reported last week that consumers who selected the most popular 'Obamacare' plans last year are in for double-digit 2015 rate increases.  Many customers now face the prospect of paying even more, or once again switching plans.  A recent Kaiser study found that 41 percent of uninsured Americans are choosing to remain uninsured, with "the vast majority" citing lack of affordability.  You told Americans that your health reform law would save the average family $2,500 per year.  Has that promise, which your adviser  Jonathan Gruber dismissed as wishful thinking, been kept?   Follow up: Every major poll shows that significantly more Americans say the 'Affordable Care Act' has directly harmed their family than who say they've been helped.  Are these people mistaken in the perception of their own lives and finances?

(4) A group of former CIA directors are pushing back hard against Senate Democrats' controversial report regarding the agency's post-9/11 interrogation program.  A core disagreement is whether tough tactics were effective in extracting useful intelligence from high-value Al Qaeda detainees.  Sen. Feinstein's report -- which didn't include interviews with any CIA officials who oversaw or carried out the program -- says that the so-called "enhanced interrogation techniques" were not at all effective.  Numerous CIA officials strongly dispute that assertion, citing evidence to fortify their position.  Did 'enhanced interrogations' work, and were they appropriate at the time?  (Follow-up: Why are summary executions via lethal drone strikes in line with "our values," but harsh interrogations are not?)

(5) This week, members of the Taliban laid siege to a grade school in Pakistan, massacring 145 students and faculty.  Are you concerned that an American withdrawal from Afghanistan will strengthen these radicals lead to even more atrocities like this?  Does your administration continue to believe that direct negotiations with the Taliban can be a fruitful endeavor?

(6) Two North Korea-themed films have been cancelled in the wake of a major cyber hack and series of terrorist threats -- which the US government have linked to Pyongyang.  Does Kim Jong Un's regime now wield veto power over American consumer's entertainment choices?  Are you troubled by the potential precedent this episode has set regarding free speech and expression?  Is America prepared to retaliate?

(7) A new NBC/WSJ poll shows that fewer than one in five Americans believe you've heard, and are responding to, the message voters sent you and your party last month.  In what ways are you respecting the voters' wishes, as represented by November's Republican landslide victory?  (Be prepared with this reality check in a follow-up).