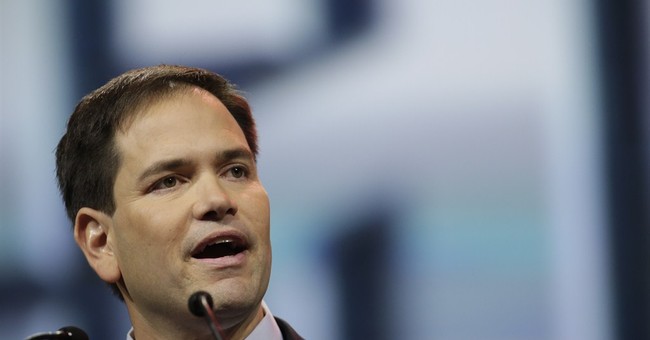 As 2016 buzz builds around one prominent Florida politician today, another is generating some attention on the same front, albeit in a more muted and cryptic way.  As you already know, former Governor Jeb Bush has effectively jumped into the presidential race; his timing suggests that he's concerned about the Mitt Train gaining steam, with the former Republican nominee's once-adamant denials gradually evolving. Jeb understands that the center-right money game is going to get very serious, very quickly -- so he's made his move.  Ball's in your court, teams Romney and Christie.  An early gauntlet has been thrown.  But while Jeb sucks up the political oxygen, his Floridian protege is   quietly maneuvering too, via the New York Times:

Senator Marco Rubio of Florida will gather over 100 Republican donors, fund-raisers and other supporters at a luxury hotel in Miami next month for a two-day strategy session about Mr. Rubio’s political future, according to an invitation obtained by The New York Times. The conference, scheduled to begin Jan. 23 at the Delano hotel in South Beach, will be hosted by Mr. Rubio’s leadership political action committee, Reclaim America, and it is expected to draw supporters from Washington and South Florida. The event comes as Mr. Rubio and other potential 2016 candidates are quietly but aggressively jockeying for the allegiance of the Republican Party’s leading donors and fund-raising “bundlers” … Mr. Rubio’s get-together will include a welcome reception on Friday and a “political update” on Saturday morning, led by the senator and Terry Sullivan, his political adviser and the director of his political action committee. The invitation’s letterhead reads “Team Marco 2016.” Should Mr. Rubio decide against a presidential campaign, he would still need to run for re-election. “Marco’s made it clear he’ll be on the ballot in 2016,” Mr. Sullivan said. “We just have to decide for what office.”


One of the percolating rumors in DC is that Rubio will not challenge his long-time mentor for the GOP presidential nomination.  Whispers of a gentlemen's agreement, in which either one or the other will run -- but not both -- will be put to the test now that Jeb is formally in.  (For what it's worth, I've heard similar things about Paul Ryan and Scott Walker in Wisconsin).  Rubio's scheduled high-level meeting isn't necessarily unusual or dispositive, though it does follow a pattern among other 2016 aspirants. The Times piece notes that Romney, Texas Governor Rick Perry and Kentucky Senator Rand Paul have held similar confabs this year, citing an "especially keen" competition "because so many candidates with strong ties to Republican donors are considering White House bids — and relatively few donors have made formal commitments."  Rubio, still in his early 40s, first needs to decide whether to focus on his Senate re-elect two years from now.  He's a relatively popular incumbent, but he'd still be running in an expensive swing state, in an uncertain political environment.  On the presidential question, he also enjoys the luxury of youth.  Unlike Hillary, Elizabeth Warren, or any number of potential GOP entrants, Rubio could wait a full decade before pulling the trigger on a White House bid...and he'd only be 53.  In the interim, he could continue to burnish his credentials in the Senate, or maybe even turn an eye toward a gubernatorial run in 2018.  Plus, he'd remain an attractive Vice Presidential option along the way, which is another mechanism for staying relevant.  Rubio's presidential calculus is two-pronged, and fairly straightforward: Am I willing to potentially give up a Senate seat to run this year, and is 2016 an unique moment in time for me?  Part of the latter consideration involves his positioning in a crowded 2016 field.  He'll have candidates to his right (perhaps most notably Ted Cruz, Bobby Jindal, and arguably Paul) and several to his Left (think the Bush/Romney/Christie set).  Does Rubio have what it takes to thread the needle and prevail as a consensus-type candidate?  And is he better equipped to be that guy than, say, Walker or someone like Mike Pence?

What's clear is that Rubio has been boning up on policy, delivering a number of serious and well-received speeches over the last few months.  He's discussed national defense and his economic vision, with a focus on the middle class.  He's also emerged as a leading critic of President Obama's executive amnesty, possibly trying to turn the page from his tumultuous period as a 'Gang of Eight' negotiator on the Senate's comprehensive immigration reform package.  The bill, which upset many conservatives, passed the upper chamber, then hit a wall in the House of Representatives.  This is someone who is working hard to position himself as a major player in Republican politics for the foreseeable future.  He needs to determine whether this is the moment he must seize, or whether it would be wiser to step back from the brightest lights this round.  Stay tuned.  I'll leave you with video of that aforementioned economic policy address, delivered at Hillsdale College in June:


Parting thought: Let's say Jeb and Romney and Christie all run.  Do they slice and dice up the moderate/center-right vote, clearing the path for a more conservative nominee to consolidate the votes to win?  (One could argue that the reverse dynamic has played out in recent cycles, resulting in McCain and Romney).  Or will the grassroots/Right vote be just as fractured?