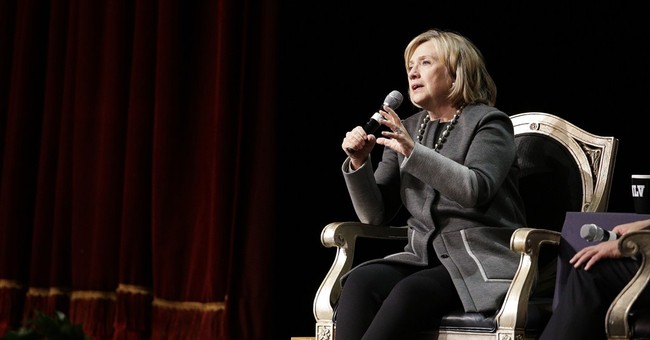 In late October, Hillary Clinton traveled to the Hawkeye State to campaign for Democratic Senate nominee Bruce Braley. Hillary offered some choice words about Braley's Republican opponent, Joni Ernst, who'd recently declined to meet with a major state newspaper's editorial board. Ernst's refusal to answer tough questions (besides in her many media interviews and debates, that is) was "disqualifying," the likely presidential candidate averred:

Hillary Clinton on Wednesday turned up the heat on Republican hopeful Joni Ernst for skipping meetings with newspaper editorial boards, calling it a “disqualifying” factor in the Iowa Senate race. “You test your candidates. You force them to be the best they can be — I understand that,” Clinton, the former secretary of State and failed 2008 presidential candidate, told about 400 supporters at a rally at a union hall for Ernst’s Democratic opponent, Rep. Bruce Braley. “They have to be willing to answer the tough questions, which Bruce has been willing to do and his opponent has not,” she continued. “It really seems like it should be disqualifying in Iowa of all states to avoid answering questions.”

The voters of Iowa disagreed, electing Ernst by a resounding 8.5-point margin, and relegating Bruce Braley to the heaping pile of defeated Democrats for whom the Clintons unsuccessfully campaigned in 2014.  Within days of her "tough questions" attack against Ernst, Mrs. Clinton traveled to Kentucky (for a cool $17,000) to stump for Alison Lundergan Grimes -- who adamantly refused to answer such penetrating questions as, "did you, as a Barack Obama convention delegate, vote for Barack Obama?"  Grimes was defeated by Mitch McConnell in a blowout.  One "tough question" that Hillary has been ducking and dodging for many months is whether she supports the overwhelmingly popular, job-creating Keystone Pipeline project, which her former colleagues at the State Department have cleared of environmental concerns in numerous studies.  One one hand are the vast majority of voters, jobs, and science.  On the other are Democrat-environmentalist mega donors.  Tough call for a calculating, hyper-ambitious pol. And thus Hillary has said...basically nothing at all.  Which leads to fun juxtapositions like this:


We must re-elect Mary Landrieu, whose recent campaign has been all about the importance of Keystone (even if her party kneecaps her along the way)!  But this green group's agenda is also vital, and their opposition to Keystone is courageous and principled!  And my position on the issue is...um, gotta go!  Disqualifying, Madame Secretary?  I'll leave you with two questions: First, did Hillary demand a special podium, multiple teleprompters, special pillows, room temperature waters, sliced lemons, hummus, and veggie platters at both events, as she apparently does for paid speeches?  Not to mention the private jet size and presidential suite requirements.  Secondly, is the 'inevitability' argument undeniable this time around (at least for the primary), and is it an asset, on balance?