Tough Death Penalty Ad: 'He Sat in a Room, and He Lied to Me' 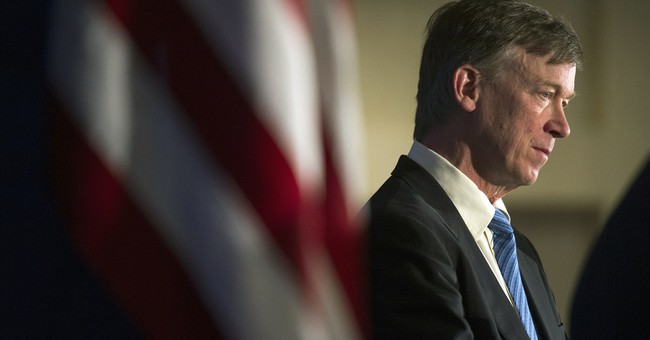 Last week, Sarah posted video of an interview-style web ad featuring Dennis O'Connor, whose daughter was murdered in cold blood by a man named Nathan Dunlap in 1993. Dunlap was convicted of the premeditated quadruple murder, the appeals process was exhausted, and the convicted killer was scheduled for execution -- until Colorado Gov. John Hickenlooper granted him a temporary, indefinite reprieve in May of 2013. Hickenlooper, who campaigned as a "vocal" proponent of capital punishment in 2010, recently told CNN that if he loses his re-election bid, he'd consider granting Dunlap full clemency during his waning months in office:

In December 1993, Nathan Dunlap hid in the bathroom of a Chuck E. Cheese in Aurora and waited until after closing before emerging to shoot five people, four of them fatally. The then 19-year-old — who was a former employee of the restaurant-attraction — was sentenced to death...Dunlap was 19 when he went to the Chuck E. Cheese's where he once worked and killed three teenage employees, Ben Grant, Sylvia Crowell and Colleen O'Connor, and their 50-year-old manager, Margaret Kohlberg, who were closing the restaurant. He also shot and seriously wounded a fifth employee, Bobby Stephens, and made off with about $1,500 in cash and game tokens...A CNN interviewer asked Hickenlooper if, "God forbid," a Tancredo-style candidate who continued to make an issue of the death penalty won, what actions could Hickenlooper take? "If they did do that, and somehow they won, there are obviously remedies that the governor could do," Hickenlooper said of his options. "I could do a full clemency between election day and the end of the year. There are a number of different opportunities to make sure that doesn't happen. Again, human life should not be a political football."


"God forbid"? Solid journalism there, CNN.  Hickenlooper told voters he was for the death penalty, then turned around and refused to sign off on the execution of one of the state's most notorious spree killers.  He says he's 'evolved' in office, which I can appreciate as someone who largely opposes capital punishment, but there's no excuse for misleading and stringing along grieving family members who've waited decades for justice.  The online version of the O'Connor ad (initially produced by an independent group) has been chopped down to 30 seconds and will now begin airing on television, thanks to a major ad buy from the Republican Governors Association:

The national group that works to get Republicans elected governor is using footage of a grieving father to hammer Democratic Gov. John Hickenlooper for indefinitely delaying the execution of killer Nathan Dunlap. The Denver Post has been told the Republican Governors Association is spending $2 million for the “substanial” ad buy, which kicks off Monday. The ad features a heartbroken Dennis O’Connor, whose 17-year-old daughter Colleen was one of four people killed at an Aurora pizzeria in 1993 by Dunlap, a disgruntled former employee. O’Connor said he waited 20 years for justice to be done, but Hickenlooper “robbed” the victims with his decision. “He’s a coward who doesn’t deserve to be in office,” O’Connor says.


The Hickenlooper campaign objects to the ad, arguing that the final on-screen graphic isn't accurate.  The text suggests that the governor's potential clemency would "set [Dunlap] free," which isn't true; the killer would be permanently spared the death penalty, but he'd stay behind bars.  This is a stupid, avoidable error by the RGA, which should revise the commercial to exclude that misleading statement.  O'Connor's message is so powerful, and his pain so palpable (watch the full, gut-wrenching interview HERE), that there's no need for embellishment. Meanwhile, Hickenlooper ran into some additional trouble at a debate over the weekend, at which he admitted to not reading a public safety policy he approved while getting tangled up discussing statutory rape:

Beauprez: "But you approved it! This was approved on your watch. March of 2011."


"I've never read that sex offender-related policy I approved" is a pretty terrible answer, but then again, we've seen on several occasions that Hickenlooper tends to adopt a decidedly 'hands-off' approach to leadership -- to put it kindly.  I understand the secondary point he tries to stutter through (should a high school senior be branded a 'sex offender' for life for the crime of hooking up with his sophomore girlfriend?) but he makes it very awkwardly, and his argument is woefully overbroad.  I have a sneaking suspicion that a Republican wouldn't get away with a sloppy, borderline-condoning answer statutory rape.