Dem Who Backs Obama 99 Percent of the Time: I'm Totally a Thorn in His Side 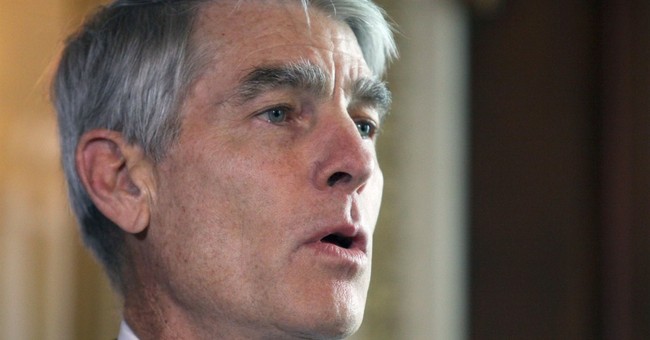 Colorado's Mark Udall is the ultimate Obama rubber stamp. He's represented his purple state in a reflexively partisan, close-minded manner, backing President Obama 99 percent of the time. He's getting pilloried for his slavish loyalty to a president whose popularity has cratered in the state, and he knows its a serious vulnerability:


But as we touched on earlier in the week, the guy just can't help himself. Udall has promised his full-throated support to Obama's Attorney General nominee, who has not been selected yet. Character and qualifications are irrelevant. (For good measure, he applauds Eric Holder's "incredible work.") If he or she is Obama's pick, Mark Udall can't wait to stand up and salute his boss:

And that's what the president is: Mark Udall's boss. But a Senator's boss should be his constituents, which is why Udall is clamoring to convince voters that his 99 percent voting fealty record doesn't accurately reflect his secret maverick status. Here he is trying (again) to claim that he's basically Barack Obama's worst nightmare, or something:


Yes, so terrified of Udall is this White House that they've invited him to play golf with the president -- making him one of the few members of Congress to have done so.  Maybe that's a perk of earning platinum loyalty status.  Meanwhile, Udall can't stop talking about birth control and 'personhood.'  Roughly half of his ads have touched on those issues, all of which have ignored Republican Cory Gardner's prominent support for expanding access to birth control by making it available over the counter (a position that's paradoxically opposed by Planned Parenthood, which hopes voters won't follow the money). The DSCC has just launched yet another birth control ad on behalf of Udall's one-note, single-issue campaign.  Gardner is pushing back in another spot of his own, correcting the record and pointing out that Mark Udall is avoiding real issues -- and debates! -- like they're Ebola: