CNN Poll: Twice As Many Americans Were Hurt By Obamacare Than Helped 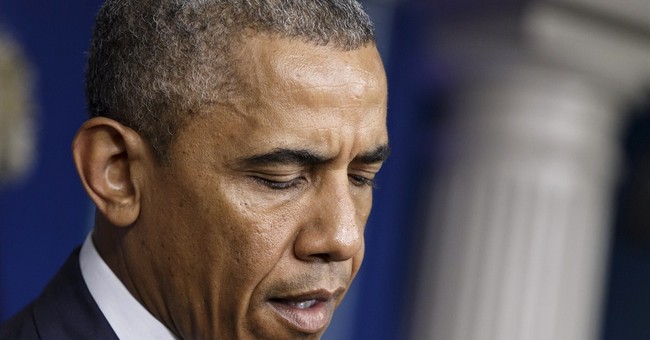 Not an unusual data point at all, based on the polling trend -- but a timely reality check for the delusional "people love Obamacare!" propagandists. CNN's latest national survey includes a number of noteworthy nuggets, including the "Affordable" Care Act fallout verdict referenced in the headline (via Ed Morrissey):


(1) President Obama's job approval rating is mired at (42/55), languishing roughly where it's been for months. He is underwater with men (39/58), women (45/52), young people (45/49), and independents (34/62). Seventy-seven percent of Democrats and nearly two-thirds of non-white voters continue to give Obama high marks, but virtually everyone else's views have soured.


(2) The president is sucking wind on personal characteristics, as well:

- Generally agrees with you on issues you care about (43/56)

- Can manage the government effectively (42/57)

As we've seen in the other polling linked above, a plurality of Americans say they haven't been impacted too much by the new law -- yet, at least. As I've said in the past, I generally fall into this category, as the "only" effect I've felt is a monthly premium increase of nearly $100. But of those consumer who have been affected, they break two-to-one into the "worse off" camp. Obamacare is helping some people; mostly Americans with preexisting conditions and those who are eligible for very generous subsidies. But it's hurting far more people. And a substantial majority oppose the law. Obamacare was pitched as a win/win for everyone, with no trade-offs and no losers. That has not been the case. Indeed, Politico is showcasing one class of Obamacare losers, who've encountered "access shock" -- a phenomenon we've been tracking for quite some time:


Anger over limited choice of doctors and hospitals in Obamacare plans is prompting some states to require broader networks — and boiling up as yet another election year headache for the health law...It’s not just a political problem. It’s a policy conundrum. Narrow networks help contain health care costs. If state or federal regulators — or politicians — force insurers to expand the range of providers, premiums could spike. And that could create a whole new wave of political and affordability problems that can shape perceptions of Obamacare.


Charlene Lake thought she got a decent deal through the Affordable Care Act marketplace: a Humana HMO that included a family doctor a few miles from her home. Five months later, Lake wonders if she can even use the insurance she bought. Her plan's dominant health care provider, JSA Medical Group, recently announced that it would take no new patients covered by Humana's exchange HMOs at least until fall. That leaves Lake no choice but to use the community health centers left in her plan's network, rather than the traditional physician's practice on which she planned. She has company...aside from first-year fumbles, the case also shows the downside of limiting consumer choice of physicians through what is known as narrow networks. Or, in Lake's case, a network so narrow it barely exists. "You can't make people sign up for a health care plan and then not have a doctor," said Lake, a St. Petersburg antiques dealer who is in her 50s. Narrow networks of hospitals and physicians help insurers maintain profitability while holding down premiums and complying with ACA rules.


Lake's quandary is redolent of the doctor-finding headache an Obamacare supporter and 'beneficiary' from New Jersey described in April. The good news is that there's at least one group of Obamacare enrollees who have voiced zero complaints whatsoever about their benefits: The fake ones.