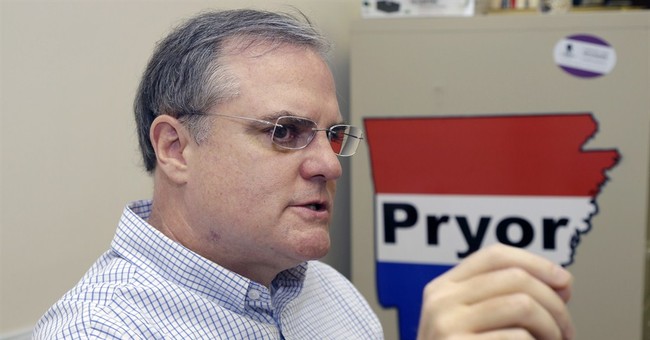 I'll say this for Sen. Mark Pryor, the Arkansas Democrat who votes with Obama 90 percent of the time: At least he didn't go the full Reid by calling millions of Americans liars. No, he merely dismissed the documented phenomena of canceled policies and increased premiums as "anecdotal" evidence against the law for which he cast the deciding vote:


Various polls have shown that Americans who were negatively impacted by the healthcare overhaul far outnumber its beneficiaries. Millions of plans were cancelled due to Obamacare's regulations, including tens of thousands in Arkansas, in spite of repeated promises that consumers would be allowed to keep their preferred plans, with more many more dropped policies looming. The administration itself predicted that as many as 93 million Americans would eventually be stripped of their existing coverage. Also, numerous polls and studies have indicated that most Americans have experienced a rise in costs, including for many of the newly insured. The law was sold by people like Pryor as a robust and across-the-board premium reducer. Both Barack Obama and his eponymous healthcare law are deeply unpopular in Arkansas. Let's review some additional "anecdotes," shall we? Premium increases in Florida:

Florida Blue, the state’s dominant health insurer, snagged more than one in three consumers on the health law’s exchange this year, but many could face rate hikes as the carrier struggles with an influx of older and sicker enrollees, said the company’s top executive...“We will be under tremendous financial pressure initially given the age, risk profile and high utilization of the new membership,” he said. “It is far from clear that large enrollment in the marketplace is a financially beneficial place to be.” ... About 23 percent of those who bought exchange policies from Florida Blue this year were in the 18-to-34 age category, Geraghty said. That compares to 28 percent nationally. Initial federal projections were that 40 percent of enrollees nationally would be young adults.


We've been writing about Obamacare's risk pool and demographics problems for months. Now here's a story about a man in Oklahoma who's had a nightmarish experience trying to cancel his Obamacare plan. Thanks to Healthcare.gov's back end data problems (which won't be fixed anytime soon) and lack of customer service (hours of waiting on hold), it took him three months to terminate coverage that he no longer needed, and even then, he was stuck with a bill he shouldn't have owed:

A long-awaited federal database designed to reveal doctor payments from the drug and medical device industries is plagued with confusing error messages, according to a report. Physicians told ProPublica that they are seeing long waits and error messages when trying to look up their entries on a preliminary version of the Open Payments website. "Doctors say it is taking them as long as an hour, sometimes longer, to verify their identifies and log in," reported Charles Ornstein with ProPublica. Those who make it through the system and do not have relationships with industry are reportedly met with the message: "You have the following errors on the page. There are no results that match the specified search criteria."


But never mind all that. Everything is working "incredibly well," we're told. People "love" Obamacare! In fact, I think it was Senator Mark Pryor who once gushed that Obamacare was "an amazing success story." What many Americans wouldn't give for an exemption like the free pass just extended to US territories by HHS -- after years of insisting that they didn't have the legal authority to grant such a waiver. Turns out the administration's definition of what counts as a "state" depends on the political imperative of the moment. Speaking of which, keep an eye on this court decision, which should be arriving any day.