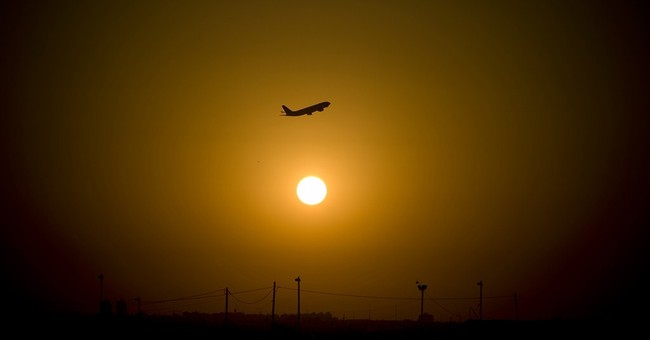 The suspension of service into Ben Gurion International began as an ad hoc precautionary measure by several US carriers, following reports that a Hamas rocket landed within one mile of the airport. Soon after, the FAA instituted a 24-hour ban on US to Israel flights, over the objections and assurances of Israeli officials. European carriers are now following suit:


Germany and France's largest airlines Lufthansa and Air France say they're suspending all flights to Tel Aviv over safety concerns amid the increasing violence. Lufthansa said Tuesday evening that it was suspending all Tel Aviv flights for 36 hours, including those operated by subsidiaries Germanwings, Austrian Airlines and Swiss. The company says it made the decision as a precaution to protect the safety of its passengers and crews. Air France says it was suspending its flights until further notice for the same reason....Palestinian militants have fired more than 2,000 rockets toward Israel. Several heading toward the area of Ben-Gurion Airport have been intercepted by Israel's Iron Dome defense system.


It's unclear as to why the FAA's moratorium only lasts 24 hours; Hamas continues to reject ceasefire terms, and Israelis overwhelmingly support their military's campaign against the terrorist organization. With IDF military objectives still on the table and Hamas' bloodthirsty intransigence, the conflict shows few signs of slowing -- let alone stopping -- in the immediate future. As the death toll mounts, Hamas supporters and sympathizers constantly harp on the "disproportionate" casualty count, noting that far more Palestinians have died than Israelis. They conveniently elide the primary reasons for that gap: Israel's 'Iron Dome' missile defense system and bomb shelter protocols have proven to be extremely effective at protecting civilians. Hamas, by contrast, intentionally and diabolically surrounds its arsenal and leaders with civilians. To recap: Hamas is actively targeting Israeli civilians, and failing. Israel is bending over backwards to protect Palestinian civilians, while Hamas publicly exhorts said civilians to risk their lives to frustrate and complicate attacks against terrorist targets. When Israel's safeguards against civilian casualties fail -- as is inevitable in war -- Hamas gleefully exploits the dead to pummel Israel in the court of public opinion. These tragedies are uniquely inevitable in this conflict because Hamas is knowingly putting innocents in harm's way. The terrorists are storing rockets in schools, using hospitals as their command centers, and reportedly traveling in ambulances "packed with children:"

With this conflict about to enter its third week, winning the PR war is the best Hamas can hope to achieve. Their weapon of choice, however, seems to be the cannon fodder of their own people, performing double duty in also sounding the drumbeat of Israeli condemnation. If you can't beat Iron Dome, then deploy sacrificial children as human shields...There are now reports that Hamas and Islamic Jihad are transporting themselves throughout Gaza in ambulances packed with children. Believe it or not, a donkey laden with explosives detonated just the other day.


Craven and intolerable. That same Wall Street Journal editorial asks whether many adult Gazans forfeited their right to 'innocent civilian' status by overwhelmingly electing a known terrorist cartel to represent them. It's a difficult, but legitimate, question. But anti-Israel forces will brush all of this highly relevant context to the side, opting instead to morbidly trumpet the number of the dead -- focusing on women and children for PR purposes. They will blame Israel, not Hamas' cynical degenerates, for these deaths. Of course, many of Israel's foes are willfully blind to the truth, and would obstinately ignore it even if it were conclusively presented through evidence. That's because many of Israel's foes irrationally despise Jews, and they're merely using the Israeli government as a proxy target for their bigotry. This isn't a specious smear. It's betrayed by their own actions. I've written pieces over the last two weeks about the sickening anti-Semitism on parade in Paris and Boston. Additional reports pile up by the hour. Canada:

A group of Canadian Israel supporters who were violently beaten last week by a crowd shouting anti-Semitic slurs said they continue to be bullied on the Internet and in the media by those who claim that they were looking for a fight. A family of six pro-Israel supporters demonstrating in downtown Calgary was assaulted late Friday by a crowd of around 100 protestors who were demonstrating against Israel’s military action in the Gaza Strip...The pro-Palestinian protestors shoved flags into Hamilton’s face and taunted her with shouts of, “kill Jews, “Hitler should finish you off,” and “baby killers.” “I heard my mother screaming because six or seven guys had jumped on my brother,” who is 19 years old, Hamilton recalled. “He had a Star of David on his shirt and they were ripping it off, biting him, and scratching him, and stomping on him on the ground.”

In a video taken at a large anti-Israel rally in Berlin this past Thursday, hundreds of protesters can be seen chanting in German, “Jew, Jew, cowardly pig, come on out and fight on your own” (“Jude, Jude, feiges Schwein, komm heraus und kämpf allein“).


It is uniquely horrifying that those words -- "Jew, Jew, cowardly pig, come on out and fight" -- are echoing in Berlin, of all places. Click through for video of a German Imam caustically praying for the annihilation of "Zionist Jews," asking Allah to "count them and kill them to the very last one. Don't spare a single one of them...make them suffer terribly." As I've written about the disgusting proliferation of anti-Semitic incidents around the globe, Israel critics have responded on Twitter, arguing that pro-Israel counter-protesters provoked the outbursts by showing up. This excuse is not only a laboratory pure example of the "heckler's veto," it also fails to explain the content of the slurs. Many of these barbarians aren't chanting, "shame on Israel." They're shrieking about despising and killing Jews. For them, none of this is about ceasefires, or rockets, or blockades, or land swaps. It's about an ancient, insatiable, and savage hatred. Fortunately, as Dan noted earlier, a large majority of Americans stand with Israel in this hour of terrible hardship. (Democrats are the least likely partisan group to call Israel's actions justified, but a plurality still do). The Jewish state may be a loathed scapegoat in many corners of the world, but not here. In fact, a Pew Research survey released last week showed that Americans' pro-Israel sympathies remain near all-time highs: