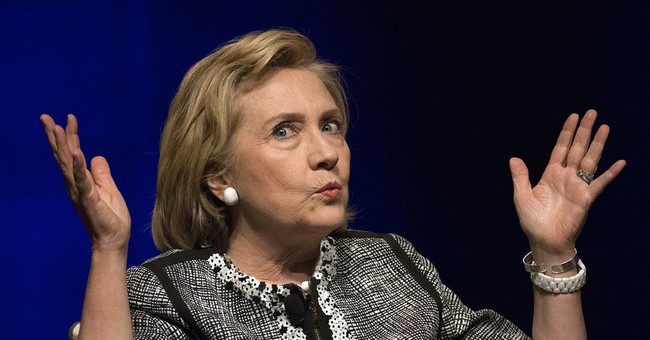 A scoop from the Washington Free Beacon's Alana Goodman exploded on Twitter Sunday night, raising new questions about the most significant case of Hillary Clinton's relatively brief legal career. The brewing controversy is, in some respects, ancient history -- involving a mid-80's interview about a case from 1975. In short, young attorney Hillary Rodham elected to take a case defending a man accused of brutally raping a 12-year-old girl. Goodman reports, "the recordings, which...have never before been reported, include Clinton’s suggestion that she knew Taylor was guilty at the time. She says she used a legal technicality to plead her client, who faced 30 years to life in prison, down to a lesser charge." None of this is per se scandalous. Indeed, attorneys are ethically obliged to furnish their clients, no matter how vile, with zealous legal representation. One can argue that lawyers have no such obligation to take on a case in the first place, which is true, but that doesn't strike me as a fair critique here. Hillary explains in the audio recording that she accepted the "tough" client as a favor to the local prosecutor. But her defense of the alleged rapist (whom she clearly believed to be guilty), and the manner in which she secured a very favorable plea bargain, is another story altogether -- as is her demeanor and tone in recounting the case in a previously-undisclosed interview:


Describing the events almost a decade after they had occurred, Clinton’s struck a casual and complacent attitude toward her client and the trial for rape of a minor. “I had him take a polygraph, which he passed – which forever destroyed my faith in polygraphs,” she added with a laugh. Clinton can also be heard laughing at several points when discussing the crime lab’s accidental destruction of DNA evidence that tied Taylor to the crime.


Clinton ruthlessly challenged the victim's emotional stability in court documents. "I have also been told by an expert in child psychology that children in early adolescence tend to exaggerate or romanticize sexual experiences and that adolescents in disorganized families, such as the complainant’s, are even more prone to exaggerate behavior," she argued. Attacking the victim has a long, sordid history in the annals of criminal defense, but it's jarring to see this approach adopted by a woman whose likely presidential campaign will be premised on empowering women. Without a signature accomplishment to tout, Clinton's defenders have also cited her emphasis on advocating on behalf of women and girls around the world as the defining legacy of her tenure at State. Thus, the tactics she was prepared to employ in this case may complicate her narrative, especially since Clinton sought to cast doubt on the veracity of an entire class of victims: Adolescent girls from broken homes. (Goodman's story also quotes a law professor who questions the ethics of Hillary revealing the results of her client's polygraph test, particularly in the context of implying his culpability). As fate would have it, Clinton ended up not needing to resort to her planned defense strategy because the crime lab accidentally lost or destroyed the key piece of incriminating DNA evidence against her client. Hillary recounts how she took the remaining potential forensic evidence to an expert in New York City, who determined that there was not enough remaining material to bring down the accused rapist:


Clinton said she got permission from the court to take the underwear to a renowned forensics expert in New York City to see if he could confirm that the evidence had been invalidated. “The story through the grape vine was that if you could get [this investigator] interested in the case then you had the foremost expert in the world willing to testify, so maybe it came out the way you wanted it to come out,” she said. She said the investigator examined the cut-up underwear and told her there was not enough blood left on it to test. When Clinton returned to Arkansas, she said she gave the prosecutor a clipping of the New York forensic investigator’s “Who’s Who.” “I handed it to [prosecutor] Gibson, and I said, ‘Well this guy’s ready to come up from New York to prevent this miscarriage of justice,’” said Clinton, breaking into laughter. “So we were gonna plea bargain,” she continued.


Clinton's client ended up serving less than a year in prison on a heavily reduced charge. Here is the relevant audio from the decades-old interview. In my judgment, the most upsetting portion comes around (4:40), when Clinton laughs out loud while describing how her efforts helped prevent a "miscarriage of justice:"


Thanks to police incompetence and her own due diligence, Hillary managed to win a sweet deal for her client -- a man she plainly believed to have raped a young girl. It's one thing to agree to take on an unsavory client and to fulfill one's professional and ethical obligations. It's another matter to have a strange retrospective chuckle about benefiting from a turn of events that let a child rapist off the hook. National Review's Jim Geraghty also wonders how Hillary might respond to questions about her planned strategy to aggressively discredit a 12-year-old rape victim:

If asked [about it], Hillary will presumably attempt to revert to “everyone is entitled to the best legal defense/legal ethics,” spin and try to keep it there, try to make it a boring story of two legal professors arguing abstract principles. The more interesting question will be whether anyone asks how she feels about attacking the credibility of a 12-year-old rape victim — particularly when, as Hillary later said on the tapes, she believes her client committed the crime. This story could change the race if this blows up big enough. If Hillary says, “yes, I regret it,” she’s admitting to an unpardonable sin in the eyes of the feminists, the Left, and honestly, a lot of Americans. But if she says, “no, I didn’t do anything wrong, I did what every good lawyer would do” she looks callous and harsh and ruthless, confirming all of the old 1990s stereotypes.


Given her stumbles in book tour interviews, there's no guarantee that Hillary would be prepared to adeptly handle such questions, even though this episode has percolated for years. A writer at Daily Kos raised the issue in 2008, back when Clinton was locked in a heated battle with progressive favorite Barack Obama for the Democratic presidential nomination. Democratic Underground highlighted the story, too. One last wrinkle: Current Politico reporter Glenn Thrush (who's...not known for his conservative activism) wrote the original piece about this incident for Newsday; it was his article that made the rounds on the lefty blogs linked above. Thrush now says that his editor at the time watered down and "buried" his story for explicitly political reasons:

@amychozick my then-editor appended a meaningless intro to the story, delayed and buried it because, in his words, 'it might have an impact'


The purpose of political journalism is to make an impact -- except, apparently, when said impact may be unhelpful to an overriding editorial point of view. Goodman's new WFB report contradicts the Newsday article, which asserted that the victim harbored no ill will toward Hillary Clinton over her role and actions in the case:

Now 52, the victim resides in the same town where she was born. Divorced and living alone, she blames her troubled life on the attack. She was in prison for check forgery to pay for her prior addiction to methamphetamines when Newsday interviewed her in 2008. The story says she harbored no ill will toward Clinton. According to her, that is not the case. “Is this about that rape of me?” she asked when a Free Beacon reporter knocked on her door and requested an interview. Declining an interview, she nevertheless expressed deep and abiding hostility toward the Newsday reporter who spoke to her in 2008—and toward her assailant’s defender, Hillary Rodham Clinton.


Parting thought: What difference, at this point, does it make?