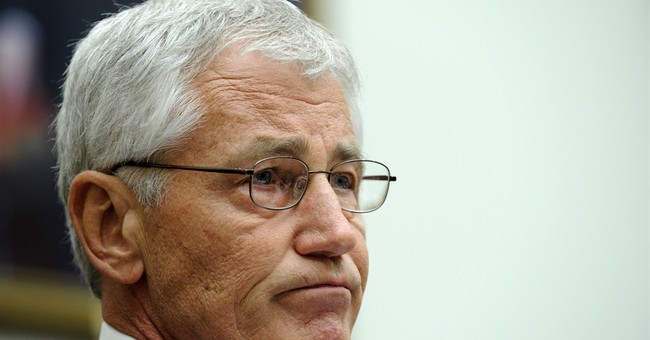 I say "admits" because the Secretary of Defense did a lot of tap dancing to avoid stating the obvious during his testimony yesterday: That these Taliban commanders were, in fact, at war with America. Under questioning from Rep. Mac Thornberry (R-TX), Hagel engaged in intensive hair-splitting on everything from the exact terminology surrounding Bowe Bergdahl's captivity, to the technical definition of negotiating with terrorists, to whether or not the 'Taliban Five' directly took part in attacks against Americans. The key bit comes near the end of this clip:

Hagel: "We have no direct evidence of any direct involvement in their direct attacks on the United States, or any of our troops. They were part of the Taliban at the time...But yes, they were combatants."

Thornberry: "So your point was they didn't pull the trigger, but they were senior commanders of the Taliban military who directed operations against the United States and its coalition partners..."


If that was his contention all along, why all the tortured parsing about "direct" evidence of "direct" involvement in "direct" attacks? Perhaps he was trying to downplay the danger these freed detainees really pose, a la Hillary Clinton's bizarre assertion that the 'Taliban Five' are not a threat to Americans -- in spite of their high-risk designation, our intelligence community's candid assessments, and the continued presence of US troops in Afghanistan. (Mrs. Clinton's approval rating has dropped precipitously in recent years, incidentally). Current and former cabinet secretaries may not be willing to articulate this deal's inherent perils for political reasons, but the American people seem to have internalized it on their own. A two-thirds majority expressed concerns about the implications of negotiating with terrorists in a freshly-released poll, even as Hagel denies that any such precedent was set. In fact, he continues to recite the party line the US government didn't negotiate with terrorists at all, since our direct talks were with Qatari intermediaries. This distinction is meaningless. We forged a deal with, and made major concessions to, the Taliban and the Haqqani network, the latter of which is officially classified as a terrorist organization by our government. The Obama administration's sophistry on this point has been betrayed by their own excuses on other fronts. When queried about the nature of the connection between the Taliban and Haqqani, Hagel said he didn't know -- which became a theme of his entire performance: