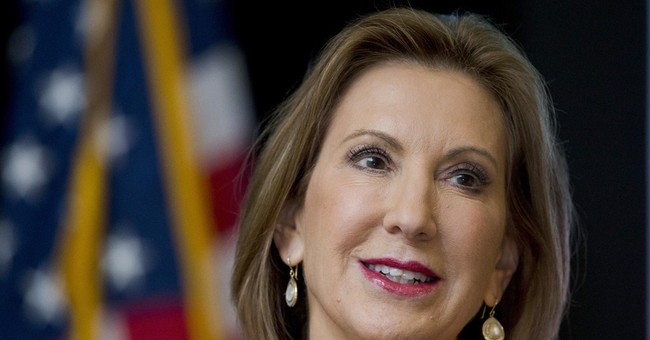 One measly poll won’t get her on the debate stage, of course, but the needle is moving in the right direction, no?

Translation: She’s tied with Rick Santorum in ninth place (a candidate, by the way, who “won eleven states!” in 2012 but seems totally hopeless this election cycle). As such, both candidates show, I think, at least some promise of meriting an invitation to the most important campaign event this summer. Far more interesting, however, is the fact that Donald Trump, of all candidates, is polling in second place. Am I dreaming? This is not a state poll, either. This is a national sample of likely Republican primary voters. Though for reasons we discussed earlier, his rise in the polls is likely to be widely-touted and short-lived.

In other news, Jeb Bush received a strong boost since announcing his presidential campaign (he’s at 15 percent), while two other candidates are noticeably slipping. Ted Cruz garnered eight percent support just three weeks ago, according to Fox's national survey, but finished at half that this week. (Scott Walker dropped three percentage points, too). Remember, though, the latter candidate hasn’t even announced he’s running for president yet. Ted Cruz has. He was the first contender to do so. And his inability to catch fire — and keep that fire burning — isn’t a good sign for him.

One final point, take a look at this:

No Republican beats Hillary Clinton head-to-head, and only Jeb Bush ties her. Gulp.