Attorney General Loretta Lynch: "We Can Restore Trust and Faith" 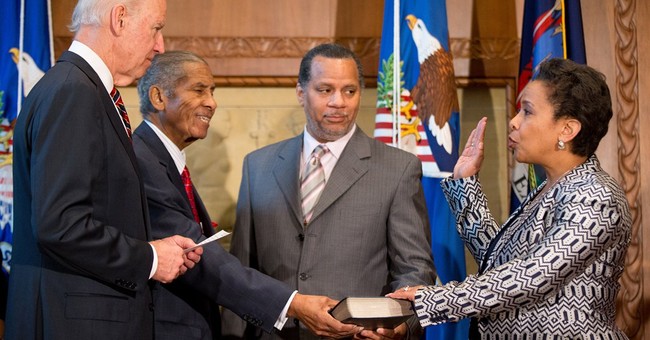 After months of waiting and a close vote, Loretta Lynch was confirmed as the 83rd Attorney General of the United States last week. In her remarks today, however, after the official swearing-in ceremony, she thanked all those who helped bring her confirmation to fruition, and pledged to do her utmost to rebuild trust in America’s judicial system.

“I am honored beyond words to step into this larger role today as your attorney general, as we continue the core work of our mission: The protection of the American people,” she said.

“We can restore trust and faith, both in our laws and in those of us who enforce them,” she continued. “We can protect the most vulnerable among us from the scourge of modern day slavery, so antithetic to the values forged in blood in this country. We can protect the growing cyber world, and we can give those in our care both protection from terrorism and the security of their civil liberties. My friends, we will do this as we’ve accomplished all things both great and small: working together, moving forward, and using justice as our compass.”

Not everyone, however, is optimistic about Ms. Lynch’s coming attorney generalship. In fact, some Senate Republicans are downright worried.

“While Ms. Lynch has earned a reputation as a no-nonsense prosecutor, her consistent refusal to specify any limitations on the power of the President disqualify her from serving as our nation's chief law enforcement officer,” Sen. Ted Cruz said in a statement last week before the coming cloture vote to advance her confirmation. “In multiple rounds of testimony before the Judiciary Committee, Ms. Lynch would not identify a single instance in which her actions would differ from Attorney General Eric Holder, and she supported the Administration's boundless legal theory to justify ignoring our nation's immigration laws. In my view, this makes her unfit to be the Attorney General.”