Of Course: Rick Santorum Is "Testing The Waters" 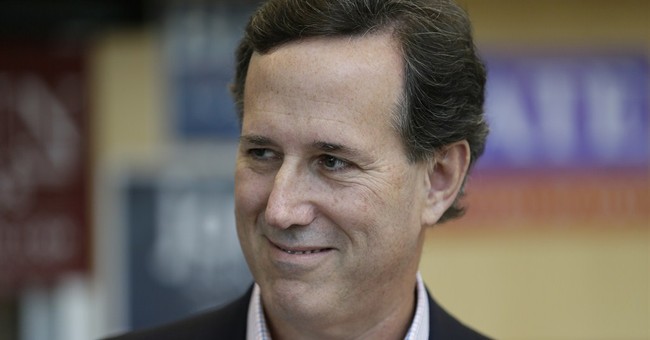 America, your prayers have been answered:

Former Pennsylvania Sen. Rick Santorum has set up a testing the waters account in anticipation of a possible 2016 presidential bid, CBS News has learned.

The account allows Santorum, a Republican who ran for president in 2012, to raise and spend money under the same caps governing an actual campaign committee ($2,700 for individual donors, and $5,000 for couples.) Unlike a campaign committee, though, a testing the waters account does not have to disclose its finances.

In fairness, ex-Sen. Rick Santorum (R-PA) went further than any other losing Republican candidate during the 2012 presidential primaries. He belatedly won Iowa, and indeed, won 11 total elections when all was said and done. He is, among other things, a principled and well-spoken social conservative, whose message resonates deeply with the conservative base—especially in states like Iowa. He also has the experience of running a national campaign, and his ability to relate to working class men and women is unquestionably an advantage.

His path to the nomination, however, is difficult to forecast. First of all, there could be as many as 20 other candidates entering the fray, many of whom have more impressive resumes—and more to offer—than he does. What’s more, he is polling at less than two percent nationally at the moment, and with Ted Cruz raising enormous amounts of money and Rand Paul gobbling up supporters (I mention these two hopefuls, in particular, as they are the only two candidates who have officially launched bids) winning Tea Party support will become increasingly more difficult. Finally, if Mike Huckabee throws his hat into the ring, as expected, what are his chances of winning the Iowa Caucuses—a state Huckabee has also already won and Santorum would desperately need to win-out to keep his campaign operational?

I value Sen. Santorum’s public service and the courage of his convictions. But if he couldn’t win the nomination in 2012, when the GOP field was depressingly weak, how on earth will he win it in 2016, when the field is extraordinarily strong?

That's a difficult question to answer. Sorry, I just don’t see it happening.