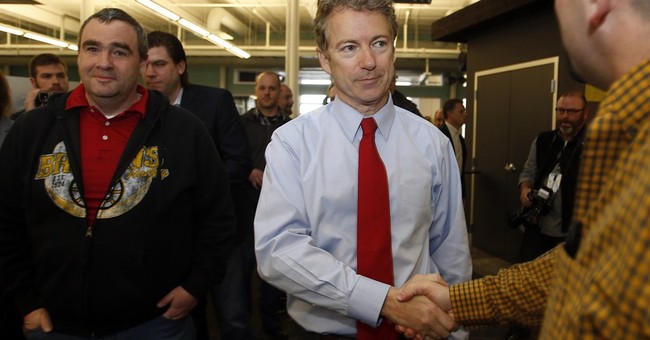 Sen. Rand Paul (R-KY) has officially entered the fray. His presidential announcement has been in the works for weeks, and thus no one is surprised by what he said.

On Tuesday, at an event in Louisville, Kentucky, Sen. Paul made the case for his candidacy, underscoring a cutting message which was emblazoned across the podium before he spoke: “Defeat the Washington machine.”

“I have a message, a message that is loud and clear and does not mince words,” he began his remarks. “We’ve come to take our country back.”

Not surprisingly, he pilloried the “special interests” and the “Washington machine” for invading “every nook and cranny” of Americans’ lives, and therefore promised to cut the size and scope of the federal government if and when he's elected.

“I have a vision for America,” he declared. “I want to be part of a return to prosperity, a true economic boom that lifts all Americans, a return to a government restrained by the Constitution.”

“Too often when Republicans have won we’ve squandered our victory by becoming part of the Washington machine,” he added. “That’s not who I am.”

Meanwhile, Sen. Paul also spoke about his work as a pro bono eye doctor. After traveling to Guatemala recently, he said, he recalled helping an elderly couple see each other "for the first time in years." He was deeply humbled by the experience.

“This is why I became a doctor,” he intoned. “I’ve been fortunate, I’ve been able to enjoy the American dream. I worry, though, that the opportunity and hope are slipping away for our sons and daughters.”

“It seems to me that both parties and the entire political system are to blame,” he averred to thunderous applause. “Big government and debt doubled under a Republican administration. And it’s now tripling under Barack Obama’s watch.”

As a result, he promised he would put a stop to the uncontrollable spending and debt by taking his message to all communities – and all people – to build support for his candidacy. In so doing, however, he emphasized that he would never renounce the principles that have guided and greatly influenced his political life.

“In order to restore America one thing is for certain, though, we must not – we cannot – dilute our message or give up on our principles,” he said. “If we nominate a candidate who is simply ‘Democrat lite,’ what’s the point, why bother? We need to boldly proclaim our vision for America. We need to go boldly forth under the banner of liberty that clutches the Constitution in one hand – and the bill of rights in the other.”

He ended on a hopeful and optimistic note.

“Today begins the journey to take America back,” he said. “To rescue a great country now adrift, join me as together we seek a new vision for America.”

“Today I announce with God’s help, with the help of liberty lovers everywhere, that I am putting myself forward as a candidate for president of the United States of America,” he said.