Obligatory Post: Jeb Bush Once Self-Identified As A Hispanic 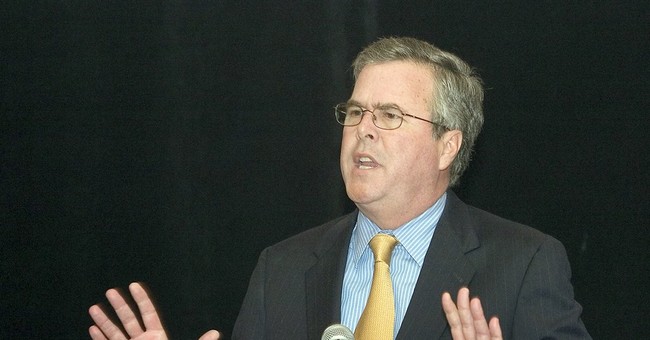 Jeb Bush has found himself, if you’ll pardon the expression, in a bit of hot water after The New York Times publicized the fact that he once falsely self-identified as a Hispanic on a government document.

Bush, as everyone who’s seen — or met — him knows, is white. Per the article:

In a 2009 voter-registration application, obtained from the Miami-Dade County Elections Department, Mr. Bush marked Hispanic in the field labeled “race/ethnicity.”

A Bush spokeswoman could offer no explanation for the characterization. However, Mr. Bush took to Twitter late on Monday morning to call the situation a mistake.

Bush tweeted out this message – “My mistake! Don’t think I’ve fooled anyone!” – in response to an innocuous and tension-diffusing tweet his son sent out brushing aside the suggestion that his father self-identified as a Hispanic on purpose, or to gain some kind of professional or pecuniary advantage. Clearly, Team Bush wants us to know he did not.

Bush’s embarrassing and headlining-generating gaffe, however, is not the best way to draw attention to himself shortly before making what many believe will be a very important announcement. In fact, it could lead, as Ed Morrissey notes, to some problems down the road.

“[Elizabeth] Warren’s story damaged her because it made her look inauthentic, and this could have the same impact on Jeb, too — especially with two authentic Latinos in the Republican primary fight,” he writes, referring to the Massachusetts senator's questionable statements about her heritage, which surfaced during her 2012 senatorial campaign. “Jeb and Marco Rubio are friends, so Rubio probably won’t overtly attack Jeb over this, but what about Ted Cruz? He’s not exactly afraid to take on Republican establishment figures, and Jeb’s the proxy for them all in the 2016 cycle.”

And yet my hunch is that, in the scheme of things, this is a very minor bump in the road for Team Bush. Unlike Warren, who benefited from her questionable ancestral claims (as Ed notes), Bush almost certainly made this mistake by accident and for no other reason than his own carelessness. Nevertheless, that doesn’t necessarily mean he should be given a free pass, or his rivals should forget the incident.

Surely they won't, but I suspect that they will have much more to criticize him about than a mistake he made six years ago when trying to exercise his constitutional right to vote. He's the establishment candidate in the race after all.