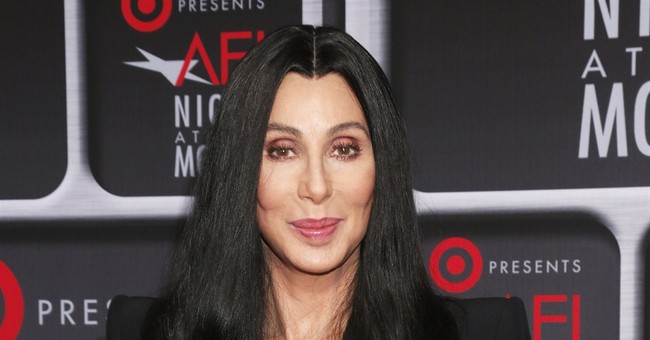 Another hot take from an American icon:

SCOTT WALKER IS A RACIST,SEXIST,LIAR, WHO CARES NOTHING ABOUT PPL?? HE ONLY WANTS 2B PRESIDENT?? “HOLD YOUR BREATH SCOTT”?? WE??WILL STOP U

Did you catch all that? Gov. Walker is a lying, misogynistic racist who hates ordinary people and will do anything to become president!

Not surprisingly, these accusations were offered without a morsel of evidence. So it's clear that Cher and her acolytes are not interested in having an intellectually honest debate about Walker's policies and vision for the country; they simply want to End [the] Discussion. It’s also worth noting that Walker survived three challenges at the ballot box in four years in a blue state. Evidently, his constituents did not see fit to retire him given numerous opportunities to do so. Hence, if he really was any of these things, as Cher claims, do you not think he would have been booted from office long ago?

Of course, it’s easy to ignore such reflexive and selective outrage from blowhard Leftists. And normally I would. But this is a perfect example -- as so many others have tirelessly pointed out -- of what Republicans are up against in 2016. They will not be given a pass for their beliefs or convictions as Democrats have and they will certainly experience character assassination and defamation on a regular basis. Walker, for his part, is already embroiled in a non-scandal for declining to answer a ‘gotcha’ question that most people would recognize he was not qualified to answer. Are we surprised?

I hope Republicans are ready. This is merely the tip of the iceberg.