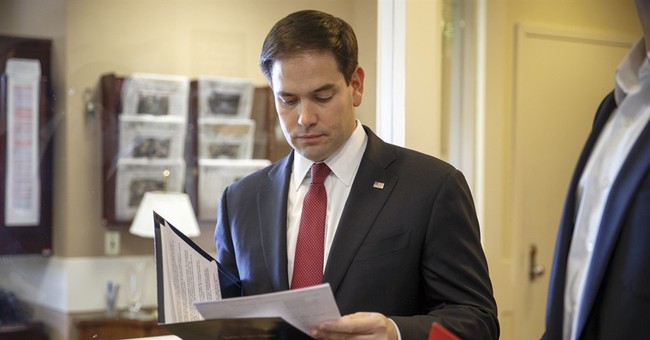 Florida is a purplish state that broke twice for President Obama. So while the red tsunami of 2014, which both demoted Harry Reid and retired many of his closest allies, was welcome news, the National Republican Senatorial Committee (NRSC) is eager to maintain their gains in 2016 and beyond. Enter Marco Rubio.

The junior Senator from Florida has already made it clear that he will not simultaneously run for president and re-election. He must therefore make a decision. And while his constituents overwhelmingly want him to continue serving them, he’s all but announced he’s going big in 2016. This is making Republican officials exceedingly nervous.

Why? Because they worry he will not only lose the nomination, but a Republican-held Senate seat as well:

Determined to protect their new Senate majority, Republican officials are lobbying Florida Sen. Marco Rubio heavily to seek re-election to Congress next year even though he says he'll forgo that campaign if he makes an expected bid for the White House.

Officials familiar with the effort say that recruiting Rubio to seek re-election is a top priority at the National Republican Senatorial Committee. Sen Roger Wicker, R-Miss., chairman of the organization, said recently he hopes Rubio will be a candidate for a second term, although he did not confirm that approaches had been made to the senator or his close aides.

Remember, you-know-who is eyeing Rubio’s job. If he were to voluntarily step aside, this greatly improves the chances of her getting a promotion. And we can't have that can we?

This explains why Republicans really want Rubio to run for re-election: He’s perhaps the only thing standing in her way.