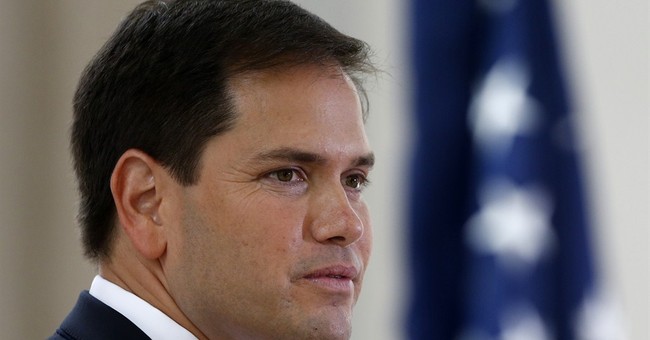 For president, mind you, not re-election because he's already said he won't run for both.

ABC News has the exclusive:

Sen. Marco Rubio has begun taking concrete steps toward launching a presidential bid, asking his top advisors to prepare for a campaign, signing on a leading Republican fundraiser, and planning extensive travel to early-voting states in the coming weeks, ABC News has learned.

"He has told us to proceed as if he is running for president," a senior Rubio advisor tells ABC News. ...

Aides expect Rubio will make a final decision in the comings weeks, but his schedule for the next month already looks more like the schedule of a presidential candidate than a senator.

So, if we take Rubio's advisor at his word, that means Rubio, Jeb Bush and possibly Mitt Romney will all be competing for establishment money, influence, and support in 2016. In other words, Rubio would have to defeat both the 2012 presidential nominee and his former mentor (who happens to hail from the same state as him) to even have a chance at the nomination.

What could go wrong?

Rubio, however, has already started publicly presenting arguments for why he would be a much stronger candidate than some of his other rivals. And apparently, he wasn’t doing that just for show.