2016 Rumblings: Walker Gently Suggests Romney Is a Candidate 'From the Past' 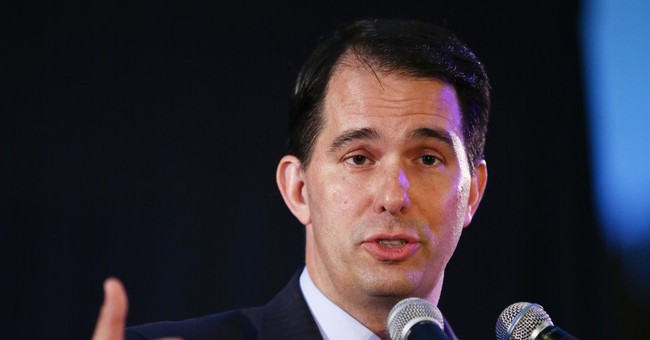 Not unlike the response Sen. Rand Paul (R-KY) gave the other day regarding another impending Romney run, Gov. Scott Walker (R-WI) suggested to Politico yesterday that Republicans need, well, a fresh face to defeat Hillary Clinton in 2016:

Wisconsin Gov. Scott Walker said Wednesday that the reemergence of Mitt Romney in the 2016 presidential field could offset the Republicans’ greatest advantage against Hillary Clinton, the likely Democratic candidate: making the case for change.

“I think the best way to counter something from the past is with something new,” Walker, the second-term governor mulling a presidential campaign, said in a phone interview. “[Americans] don’t want the worn-out, tired views of the past.”

In fairness, Romney’s views aren’t all that different from other candidates presumed to be entering the race. Perhaps what Walker meant to say, then, is that Americans are “worn out” from the same old candidates "of the past." If and when Romney announces he’s in, it will be the third time he’s run for president since ‘08. In order to keep conservatives happy, and broaden the party’s growing appeal, Walker implies, it’s finally time for the former Massachusetts governor to step aside.

Of course, all the ambitious candidates weighing presidential runs have a vested interest in seeing Romney sidelined. Not only did he win the Republican nomination in 2012 (and garner some 61 million votes shortly thereafter) but he also has the infrastructure and experience to be a force to be reckoned with early in the primaries. Still, infrastructure and experience may not be enough to win in a vastly changing political landscape, as The New York Times pointed out  this week:

...[I]nterviews with more than two dozen Republican activists, elected officials and contributors around the country reveal little appetite for another Romney candidacy. Beyond his enthusiasts — a formidable constituency given that many are donors — opinions range from indifference to open hostility.

Some party leaders are still angry about the former venture capitalist’s struggles to fend off the inevitable attacks on his business background, his awkward demeanor, and his inability to connect with working-class and minority voters. While political circumstances change between campaign cycles, Mr. Romney’s vulnerabilities, they say, are a constant.

Jonah Goldberg expanded on this theme in his column yesterday:

As I’ve been saying for years, Romney has an authentic inauthenticity problem; he seems fake, but that’s actually him. Not only does he look like the picture that came with the frame, he talks like a 1920s college president. Maybe it speaks ill of America that voters put so much stock in empathy and authenticity, but they do.

In other words, on top of his obvious flaws as a candidate – his perceived wooden personality, his wealth, and his widely panned "47 percent" remark -- he may not be all that likeable or relatable. Plus, as the Washington Post’s Chris Cillizza posits, his public persona has already been defined:

There's no question that Romney feels a call to service and believes that he is uniquely able to solve the problems of the GOP and the country at the moment. But, the assumption that he can pluck the good things from his past candidacies while wiping away -- "Eternal Sunshine of the Spotless Mind"-style -- all the bad stuff from voters' minds is a deeply flawed reading of how politics works. And it's why it makes little sense for Romney to run again.

But apparently he is. I’ll leave you with this:

Mitt Romney is beginning to assemble a campaign team, and is turning to a former aide with ties to Chris Christie to work as a liaison with the media as the 2012 GOP presidential nominee takes steps to once again run for the White House.