John Kerry: Freedom of Speech "Can Be Attacked But Never Eradicated" 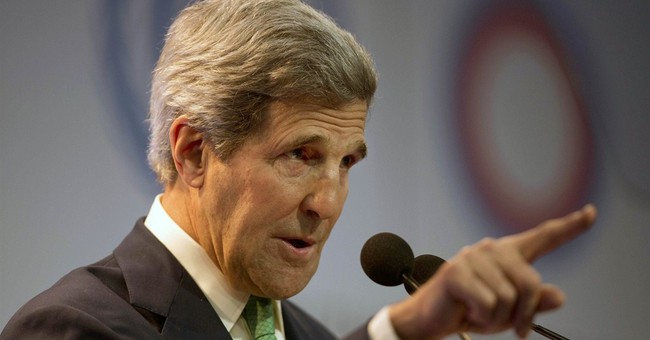 Secretary of State John Kerry delivered some brief remarks today about the sickening massacre in Paris, France that stunned and surprised the civilized world.

“I would like to say directly to the people of Paris and all of France that each and every American stands with you today,” he asserted. “Not just in horror or in anger or in outrage for this vicious act of violence. But we stand with you in solidarity and in commitment both to the cause of confronting extremism, and in the cause which the extremists fear so much and which has always united our two countries: Freedom.”

“No country knows better than France that freedom has a price because France gave birth to democracy itself,” he continued. “France sparked so many revolutions of the human spirt [and] that is what the extremists fear the most.”

He also reminded those listening that lone-wolf acts of terrorism like the one perpetrated today will not silence those who have God-given rights to self-expression. The core tenets of the Western world, he argued, are far too precious to be given up so easily.

“They may wield weapons but we in France and in the United States share a commitment to those who wield something that is far more powerful,” he intoned. “Not just a pen, but a pen that represents an instrument of freedom, not fear. Free expression and a free press are core values -- they are universal values -- principles that can be attacked but never eradicated because brave and decent people around the world will never give in to the intimidation, and the terror, that those seeking to destroy those values employ.”

“Today’s murders are part of a larger confrontation -- not between civilizations, no -- but between civilization itself and those who are opposed to a civilized world,” he continued. “The murderers dared proclaim Charlie-Hebdo is dead. But make no mistake: They are wrong."