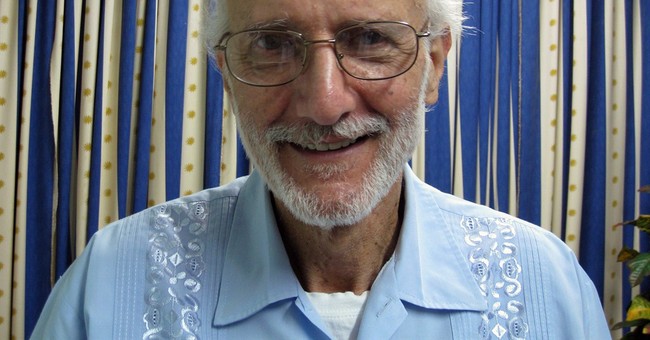 Alan Gross was imprisoned in Cuba for half a decade. He’s a free man now and spoke to the public today from the nation's capital about his deliverance.

“Today is the first day of Hanukkah,” he said. “And I guess so far it’s the best Hanukkah I’ll be celebrating for a long time. What a blessing it is to be a citizen of this country and thank you President Obama for everything you have done today and leading up to today.”

He also especially thanked his wife and lawyer who worked tirelessly to bring him home.

“They have my endless gratitude, love, and respect,” he emphasized.

“I want to thank all of the members of Congress from all sides of the aisle…who spoke up or visited me, subjected themselves to my ranting, and helped me regain some of my weight,” he continued. “Even in Cuba, M&Ms melts in your mouth and not in your hand.”

He also thanked Muslim, Christian and especially Jewish organizations and individuals who never gave up on him.

“It was crucial to my survival knowing that I was not forgotten,” he said. “Your prayers and your actions have been comforting, reassuring, and sustaining.”

“Ultimately, the decision to arrange for and secure my release was made in the Oval Office,” he said. “To President Obama and [his] staff, thank you.”

“I’m incredibly blessed finally to have the freedom to resume a positive and constructive life,” he continued. “But for now I’ll close with a quote from one of Nelson Demille’s characters: ‘It’s good to be home.’”