70 Years Later: The Battle of the Bulge 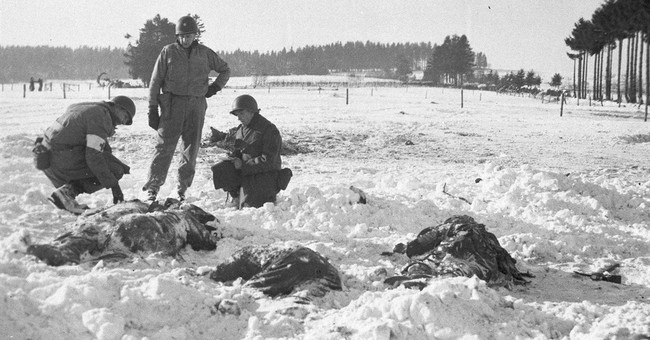 Perhaps like most people my age, I first became aware of the Battle of the Bulge when I saw the award-winning, HBO miniseries Band of Brothers as a teenager. As it happens, my late grandfather (a World War II veteran himself) was given a copy of the show from his son (my uncle) for Christmas. After some unsolicited pleading, he eventually let me borrow it. In many ways, watching this show was almost certainly when my interest in military history first began.

For those who haven’t seen it -- why haven’t you? -- the show follows "Easy Company" all the way from Camp Toccoa, GA to Hitler's Eagle’s Nest -- and beyond. Most memorably, perhaps, the show gives a dramatic retelling of their struggle in the Ardennes Forest towards the end of the war. Trench foot, illness, fatigue, lack of medicine, and despair are only some of the challenges American GIs faced that bone-chilling winter, to say nothing of the moribund yet-still-unrelenting enemy they were tasked with defeating. For many soldiers, it was perhaps the darkest period of the war.

Some background on the battle:

Starting on Dec. 16, 1944, and for nearly six weeks, more than 600,000 American soldiers, fighting in freezing conditions and often hungry and dog-tired, took part in desperate efforts to contain, then throw back, a surprise German counteroffensive masterminded by Adolf Hitler himself.

British Prime Minister Winston Churchill hailed the ultimate result as "an ever-famous American victory." But it came at a high cost: 80,987 U.S. casualties, including 10,276 dead, 47,493 wounded and 23,218 missing, according to the U.S. Army's official history.

After the end of the battle, on Jan. 28, 1945, Allied forces attacked Germany in unison, eventually leading to the Nazi surrender and the end of World War II in Europe.

Today is the 70th anniversary of this storied battle. For obvious reasons, it is important -- and incumbent upon all of us -- to remember it and all the soldiers who fought there. I'll leave you with this: