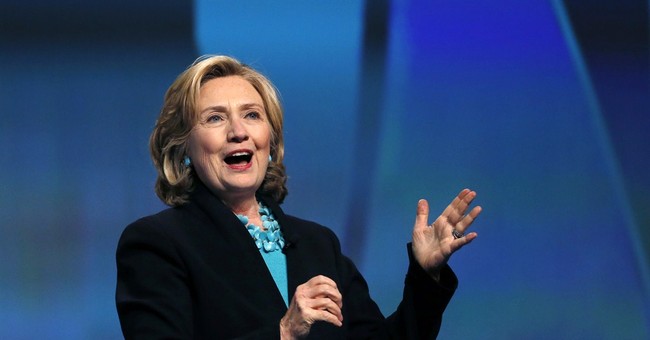 At first blush, a new Bloomberg Politics poll shows Hillary Clinton in fine shape heading into 2016. Her net favorability rating is +10 (52/42) -- the highest of any candidate surveyed. She also trounces her presumed GOP rivals in hypothetical head-to-head contests: The second graph, presumably, is from the bigger, 1001 US adult sample.

(1) This poll is making a splash for obvious reasons but one GOP pollster warns us not to look too deeply into the findings. “She has 100 percent name ID,” Whit Ayres told Bloomberg. “I would have been stunned if any of the Republicans beat Clinton on any measure.”

(2) A number of Republicans on the 2016 to-watch list are conspicuously absent from the poll. Among others, Marco Rubio, Scott Walker, Mike Pence, Bobby Jindal, and Rick Perry didn’t make the cut. So while Hillary is technically defeating ‘all Republican candidates’ at the moment, according to this survey, many presidential hopefuls aren’t even on the ballot.

(3) As far as I can tell, there’s no sample breakdown. What percentage of Republicans, Independents, and Democrats participated in this survey? Answer: We don't know. As a result, this poll could potentially be skewed, which actually wouldn’t be all that surprising given a recent Q-poll shows Mitt Romney statistically ahead of Hillary Clinton.

Having said all that, Clinton has one early, decidedly big advantage according to Bloomberg's interpretation of the poll:

While Clinton lacks Obama’s overwhelming empathy advantage, she's better positioned two years before the election in every other attribute. When respondents were asked which potential candidate did a better job on each of four qualities, she runs seven to 20 points ahead on leadership when pitted against former Florida Governor Jeb Bush, New Jersey Governor Chris Christie, Texas Senator Ted Cruz, Kentucky Senator Rand Paul, and Romney. Though Clinton has yet to provide a detailed account of how she'd guide the nation as president, Americans think she has more of a vision for the future than any in the Republican field. When measured on that attribute, she leads Romney by 6 points, Paul by 10 points, Bush by 15 points, Christie by 17 points, and Cruz by 21 points.

Perhaps if the sample is skewed, that might explain why Hillary Clinton's polling so well, so early. Otherwise, Republicans have a lot of catching up to do.

On the plus side, they have plenty of time.