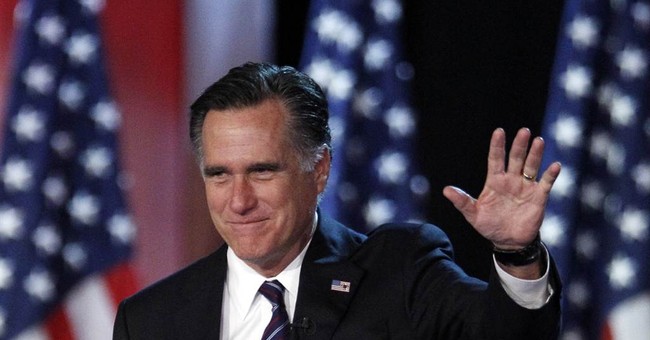 If this anonymous, overly optimistic, and perhaps non-credible insider is to be trusted, Mitt Romney is in the earliest stages of planning his 2016 presidential run:

Mitt Romney held meetings with donors in New York this week that left one attendee convinced he is running for president again in 2016.

A member of Romney's inner circle who spoke to Business Insider said the former governor of Massachusetts traveled to New York City on Monday where he met with key financial backers of his past campaigns to lay the groundwork for a 2016 White House bid.

The source, who was at one of the meetings, said other attendees included developer Stephen Ross, New York Jets owner Woody Johnson, and hedge funders Julian Robertson and Paul Singer.

A representative for Romney did not immediately respond to a request for comment about the meetings from Business Insider.

Can we take the representative’s silence as an implicit admission his boss is running? Kidding. In all seriousness, though, Romney's supporters are using every trick in the book to get him to run while at the same time the former Republican nominee himself has yet to completely and unambiguously squash all the rumors. The following quote, perhaps, best illustrates his thinking at this stage in the game. In an apparent reference to the greatest comedic movie character of all time, he told radio host Hugh Hewitt last spring that his chances of running are about “one in a million”:

And yet, an adviser in his “inner circle” is utterly convinced he’s running. Hmm. Either this guy is lying through his teeth to keep the dream alive, or he’s gone public with a very big scoop most people, I assume, are disinclined to take seriously.

So I’ll leave it to you, dear reader, to decide which scenario is more plausible. Either way, the speculation continues...