Study: The Percentage of Full-time College Students Graduating 'on Time' May Shock You 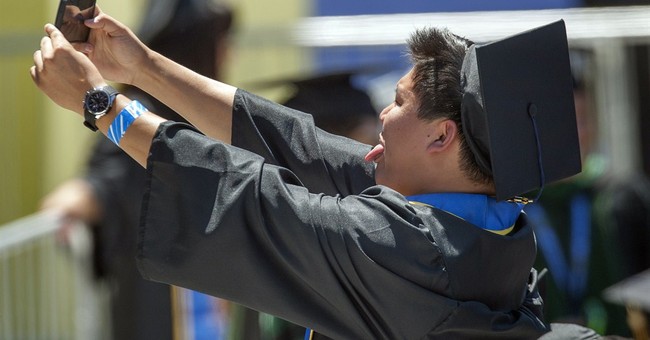 Two caveats before we get to the article itself. First, the study explained below does not take into account students who attended private institutions. And second, the following statistics apply only to those in full-time programs.

All the same, far too many students pursuing undergraduate degrees are, shall we say, taking their sweet time finishing up.

The vast majority of students at American public colleges do not graduate on time, according to a new report from Complete College America, a nonprofit group based in Indianapolis. “Students and parents know that time is money,” said the report, called “Four-Year Myth.” “The reality is that our system of higher education costs too much, takes too long and graduates too few.”

Nationwide, only 50 of more than 580 public four-year institutions graduate a majority of their full-time students on time. Some of the causes of slow student progress, the report said, are inability to register for required courses, credits lost in transfer and remediation sequences that do not work. The report also said some students take too few credits per semester to finish on time. The problem is even worse at community colleges, where 5 percent of full-time students earned an associate degree within two years, and 15.9 percent earned a one- to two-year certificate on time. The lengthy time to graduate has become so much the status quo that education policy experts now routinely use benchmarks of six years to earn a bachelor’s degree and three years for an associate degree.

In other words, even at the nation’s most prestigious public colleges and universities, roughly two-thirds of students cannot complete their studies in a four-year period. This is astonishing -- and if true -- means that untold thousands of young people every year are falling deeper into debt, languishing outside the labor market, and putting their long-term financial health at risk.

Recommended
There's a Reason Why You Won't See Legal Analyst Jeffrey Toobin for a While on CNN, Folks.
Matt Vespa

It seems to me educators, mentors, and especially parents need to do a better job explaining to young men and women the dangers of being a perpetual student. Speaking from experience, and to be perfectly honest, when I was younger the idea of taking out tens of thousands of dollars in student loan debt didn’t really faze me all that much. After I was required to pay the loans back, however, I finally came face-to-face with reality. Perhaps, then, some college students simply have little or no conception of just how expensive college is, or what they’re getting themselves into.

If they did, I suspect they’d be more inclined to study harder, choose their courses more selectively, and think more carefully about whether college is even worth it.

Because in the end, there's a chance that it isn't.