McConnell: If We Don't Reach 60 Votes on Keystone Tonight, We'll Pass it Next Year 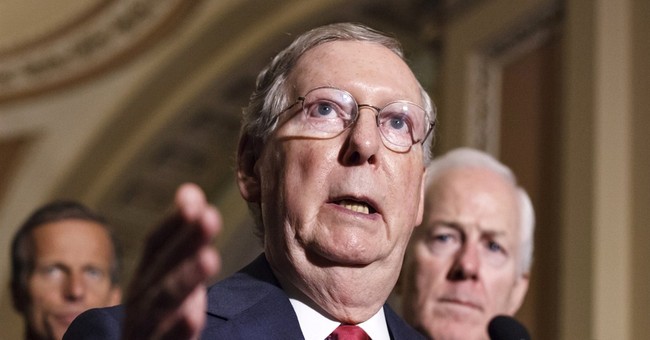 Either way, a bill approving the Keystone XL Pipeline will be sent to the president. Whether that process begins tonight or sometime during the next legislative session matters not. Sooner or later, the president will have no choice but to make a decision: Either veto the bill or approve it.

Historic Republican gains earlier this month — along with the public’s longstanding insistence that the pipeline finally get underway — leave Team Obama with little wiggle room. They must act eventually.

Republican leaders vowed Tuesday to take up and pass a bill approving the Keystone XL pipeline in Congress again next year if the Senate fails to advance the measure, or President Barack Obama vetoes it. Senate Minority Leader Mitch McConnell, who will become the majority leader in January, called on Democrats to vote for the bill, which is supported by all 45 Senate Republicans. Sen. Mary Landrieu, D-La., was still searching for the last vote needed to advance the measure, but said on the floor Tuesday she "knew in her heart" she had the 60 votes.

The House passed a bill last week spearheaded by her rival, Louisiana Republican Rep. Bill Cassidy, the ninth time that chamber has tried to jumpstart the pipeline's construction. Landrieu faces an uphill fight to hold on to her Senate seat in a Dec. 6 runoff against Cassidy. "I wish the Senate would have followed the lead of Congressman Cassidy and his House colleagues in approving Keystone years ago. It's just common sense," McConnell said. "And if not, a new majority will be taking this matter up and sending it to the president."

The jury is still out whether Sen. Landrieu will garner enough votes to send a Keystone-authorizing bill to the White House later this evening. But we’ll find out shortly after 6:15 PM EST.