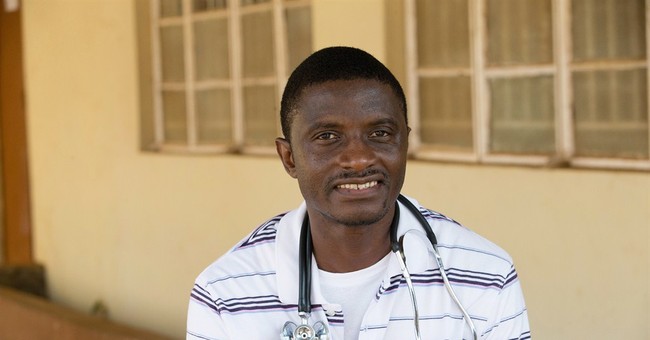 Ebola patient -- and Good Samaritan -- Dr. Martin Salia landed in the United States from Sierra Leone on Saturday. He was, one might say, trying to make the world a better and more humane place. Earlier today, however, the hospital treating him announced he didn't make it:

Dr. Martin Salia, a surgeon who was diagnosed with Ebola in Sierra Leone and flown to Nebraska over the weekend for treatment, has died, hospital officials said Monday. Salia, 44, became the second person to die of the disease in the United States. Thomas Eric Duncan, who contracted Ebola in Liberia and traveled to Dallas, died last month.

Salia landed Saturday in Omaha. He was the 10th patient to be treated on American soil and the third at Nebraska Medical Center. Hospital officials had said that he was perhaps sicker than any other patient flown to the United States from West Africa. “It is with an extremely heavy heart that we share this news,” said Dr. Phil Smith, medical director of the hospital’s biocontainment unit. “Dr. Salia was extremely critical when he arrived here, and unfortunately, despite our best efforts, we weren't able to save him.”

As noted above, Dr. Salia is the second person to lose his life in the U.S. after contracting the virus. He was reportedly “extremely critical” upon arrival, and therefore his chances of surviving were never good. Also, due to an early testing mistake -- and despite receiving top medical treatment -- his “advanced symptoms” were just too far along, it seems.

Sadly, there was nothing medical professionals could do:

Salia was the 10th person with Ebola to be treated in the United States, and the second to have died from the infection. In October, a Liberian man, Thomas Eric Duncan, died at a Texas hospital of the virus which has killed thousands of people in West Africa in history's largest outbreak to date.

The World Health Organization said Friday that 5,177 people are known to have died of Ebola across eight countries, out of a total 14,413 cases of infection, since December 2013.

Salia was a “permanent US resident” who risked his personal safety -- and ultimately his life -- to care for others. He was 44 years old.