Poll: For First Time in 3 Years, Republicans Have Higher Favorables Than Democrats 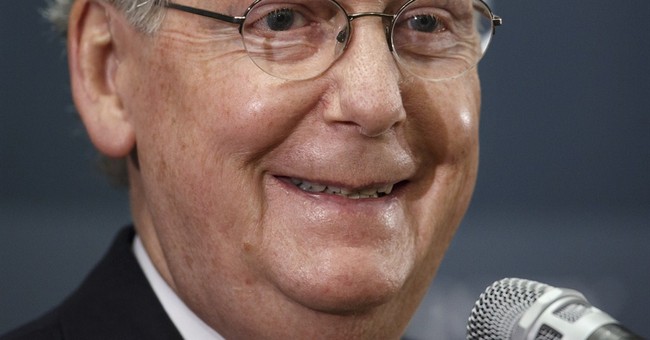 Not only did Senate Democrats experience devastating losses at the polls on Election Day (another key contest was called earlier today, as it happens), but the party is also grappling with plummeting favorability ratings. To wit: After the midterm elections that saw the Democratic Party suffer significant losses in Congress, a record-low 36% of Americans say they have a favorable opinion of the party, down six percentage points from before the elections. The Republican Party's favorable rating, at 42%, is essentially unchanged from 40%. This marks the first time since September 2011 that the Republican Party has had a higher favorability rating than the Democratic Party.

These results come from a Nov. 6-9 Gallup poll, conducted after Republicans enjoyed a breathtaking sweep of important contests throughout the country in this year's midterms. The party gained control of the Senate and will likely capture its largest House majority in nearly a century. Additionally, the GOP now controls 31 governorships and two-thirds of state legislative chambers.

Indeed, the gains Republicans made at the state level are arguably more impressive. The voters sent an unmistakable message to the president's party that one hopes even Democrats cannot miss. (Or can they?)

That being said, the favorability ratings of either party are neither stable nor set in stone. And therefore history demonstrates that Republicans, if they’re not careful, could soon find themselves once again falling out of favor.

“After President Barack Obama's re-election in 2012, the Democratic Party's favorable rating spiked to 51%, the first time either party had enjoyed majority support since 2009,” the Gallup pollsters write. “However, after the post-election glow wore off, the party's image settled back down near the 45% average for the Obama presidency. Meanwhile, Americans' favorable ratings of the Republican Party collapsed to 28% during the fall 2013 federal government shutdown, the lowest such rating for either party since Gallup first asked the question in 1992.”

Of course, Sen. Mitch McConnell (R-KY) has already said that another government shutdown will not happen. But if it does, I suspect Republicans' comparatively strong favorability numbers will crash just as quickly as they climbed.